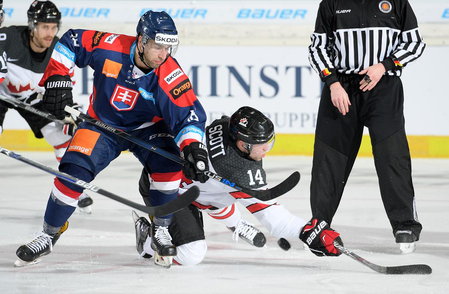 Slovakia will head into the final day of the Deutschland Cup with an advantage thanks to a 4-3 shootout victory over Canada on Saturday.

With both teams starting the three-game tournament with a victory on Friday, a win on Saturday meant that one of the two would have a very good chance at winning the tournament. Canada was the first to strike in the game, as Kevin Clark took a good pass by Nick Petersen in the slot and beat Jaroslav Janus with the one-timer to make it 1-0 for the Canadians at the 7:49 mark.

The Slovaks bounced back at the halfway mark of the period. Andrej Kudrna did a great job of forcing a turnover in the neutral zone before taking the puck near the Canadian net. Pondering his options, Kudrna made a quick sidestep before sending the puck over to Martin Gernat, who fired a hard wrist shot in the back of the net for the 1-1 goal.

Just a minute into the second, the Slovaks thought they had the go-ahead goal. A big scramble in front of the net did result in the puck going in, with Eduard Sedivy being the skater to tap in the puck. The goal was waved-off due to goalie interference, however, as there were multiple players around Barry Brust that made it tough for him to move around.

A barrage of goals in the middle of the second made things extra exciting. Slovakia would indeed take the lead after Kudrna made it 2-1 with a wicked wrist shot, stealing the puck once again from the neutral zone for the shorthanded goal at 11:51.

Then, about 40 seconds later, Canada tied it up again. Matt Ellison would do the honours, taking a pass from Chay Genoway in front before tapping it in on the open cage, making it 2-2.

But Slovakia battled back to regain their lead. This time, Adam Janosik used a screen in front to beat Brust, sending a well-placed wrist shot on net, only to have Brust get a piece of it and deflect it in the net.

Canada came to win, and they knew they`d have a tough time taking the overall title if they didn`t win on Saturday. At 7:46 in the third, Greg Scott tied the game up at three after taking a pass from Clark and sending it past Janus for the 3-3 marker.

The game couldn’t be decided after 60 minutes, and no winner was crowned in overtime.

The final day of the Deutschland Cup will take place on Sunday, with Slovakia in the drivers seat right now. If Canada fails to get three points against Germany tomorrow, Slovakia can pull off the victory, assuming Switzerland doesn’t win today and then again tomorrow. If Canada wins in 60 minutes and Slovakia falls to Switzerland in regulation, then Canada would have the tiebreaker.