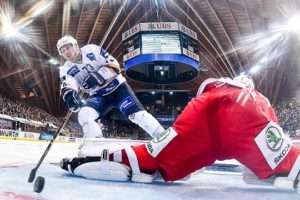 Tournament favorite Metallurg Magnitogorsk had a tough time against the well-organized Trinec team in the first game of the 92nd Spengler Cup. Maxim Matuschkin shot the equalizing goal only in the 53rd minute for the Russians to make it 1-1. In the resulting penalty shoot-out only Roman Ljubimov landed the puck in the net for Magnitogorsk.

Goals were rare in the opening game of the 92nd Spengler Cup, although there were many attempts. The 5,359 fans in the Vaillant Arena enjoyed the extremely engaging match. Both goaltenders – Simon Hrubec (Trinec) and Artem Zagidulin – hat several chances to demonstrate their expertise. While both teams demonstrated not only their superb organization but also their skating skills and tactical training.

With a practiced powerplay maneuver, Trinec took the lead. Martin Adamsky deflected the hard-hit pass from defender Vladimir Roth into the net (23rd minute). Immediately prior and also thereafter Martin Ruzicka failed in his quick solo counter attacks against Zagidulin. In the third period, the Russians increased their offensive pressure as is clearly shown in the shots-on-goal statistic 12-5. Only Maxim Matuschkin was successful in beating Hrubec (53rd minute).

After a goalless overtime, the penalty shoot-out was needed to force a decision. Trinec brought in Petr Kvaca for Hrubec at this point. He was overpowered by the first penalty shooter, Roman Ljubimov. All subsequent penalty shooters failed. Trinec’s Ruzicka had an unlucky shot that hit the goal post. Kvaca was also unlucky when he injured himself during his successful defense of the penalty attempt by Matuschkin.

Matt D’Agostini’s goal early in the second period stood as the winner as Canada held off HC Davos 2-1 on Wednesday in both teams’ opening game at the Spengler Cup.

Zach Boychuk opened scoring for Canada, while Zach Fucale made 18 saves for the win.

Although most participating teams in the event are club teams from around Europe, Hockey Canada puts together a team of free agents and other Canadians playing abroad to compete.

Neither team scored on the power play. Canada was 0 for 6 and HC Davos was
0 for 4.