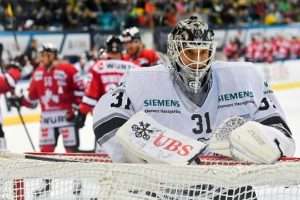 At the 92nd Spengler Cup, Team Canada easily qualified for the final which will take place on Monday (12:00 noon). Led by the outstanding Zack Boychuk, the Canadians won 4-2 against the Thomas Sabo Ice Tigers on Sunday afternoon.

Team Canada’s victory against the Ice Tigers indicates they are on their way to successfully defend the title at the Spengler Cup. With this 16th tournament win, they could take over the sole leadership of the winner statistic. The basis for their semi-final victory against the Germans was set early by the Canadians – in the first period – led by Zack Boychuk. The 29-year old forward, who joined SC Bern from Sevestral Tscherepovets (KHL) during this season and who also played in the successful team at last year’s Spengler Cup, arranged for the early 3-0 lead in the first period. He prepared the first goal with a pass to Cory Emmerton, then sunk the next 2 goals himself.

The Germans never gave up, even when they were clearly behind – Chris DiDomenico increased the lead to 4-0 in the 23rd minute. They showed excellent morale and lots of fighting spirit. In the last period, they were able to reduce the lead to 2-4 thanks to goals shot by Daniel Weiss and Brandon Buck. The Nürnebrgers pleased the crowd with their strong ice hockey at their premiere participation at the Spengler Cup. The highlight for the Germans was their surprising 3-1 victory against Metallurg Magnitogorsk. 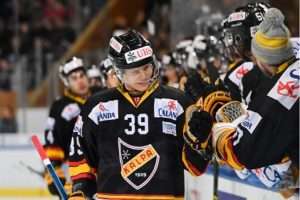 In the fastest-paced game of the 92nd Spengler Cup tournament, HC Davos fell short in the semi-final game against KalPa Kuopio on Saturday evening. Yannick Frehner was able to equalize the game for the home team in the 46th minute, but just 5 minutes later Jaakko Rissanen re-took the lead for the Finns 2-1. They will play in the finals for the first time on Monday at noon against the defending champion Team Canada.

The Finns started the game like a display of fireworks. Thanks to the exceptional skating skills of all their players, KalPa put so much pressure on the home team that they barely got the puck out of their own zone. The logical result was KalPa’s go-ahead goal after only 131 seconds resulting from a long shot by Kim Nousianen. The Davos team needed quite a bit of time to adjust to the relentless assault by the guests. This was confirmed by the statistic: in the first 11 minutes HCD goaltender Gilles Senn had 11 shots-on-goal to deflect, during the rest of the period only once more.

The intermediate result after 40 minutes was 1-0 for KalPa Kuopio. However, the spectators had absolutely no cause to complain that it was a boring game. Both teams delivered an enthralling, offensive slugfest with many scoring opportunities. The shots-on-goal ratio was 8-8 in the second period, the puck narrowly missing the goal posts often while the players made daredevil shots.

The host team finally made it work in the 46th minute. The 20-year old Yannick Frehner, member of the young 4th block, sunk the puck to make it 1-1. Shortly thereafter the Davos team missed several chances to take the lead during the only power play situation. The opponents did it better. Jaakko Rissanen completed a counterattack after receiving an ideal cross pass from Alexandre Texier 2-1 and secured the final ticket for the Finns.