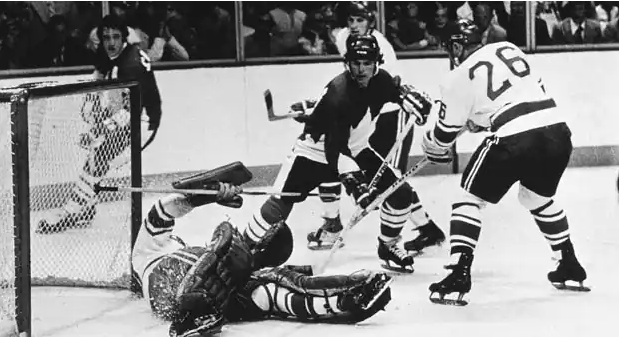 Paul Henderson #19 of Canada shoots on net during Game 1 of the 1972 Summit Series against the Soviet Union on September 2, 1972 at the Montreal Forum. In net for the Soviet Union is Vladislav Tretiak.

The festive atmosphere that surrounded Game 1 of the Summit Series was nowhere to be found in Game 2. The 16,485 fans who filled Maple Leaf Gardens in Toronto had seen the Soviets slice up the best the NHL had to offer in the series opener, and players and fans now knew this was going to be a long and tougher series than anyone first thought.

Team Canada head coach Harry Sinden made line-up changes before Game 2. He had stressed skating and speed in lineup choices for Game 1, and even with that philosophy, the Soviets skated faster the Canadian team.

It was time to get more of the “diggers” in the lineup for Game 2. Wayne Cashman and J.P. Parise were added along with Stan Mikita. Three changes on defence included the Chicago Blackhawk pairing of Pat Stapleton and Bill White, along with Serge Savard.

Out of the lineup was one of the best NHL lines from the New York Rangers. Vic Hadfield, Jean Ratelle and Rod Gilbert took a seat for Game 2. Other scratches were Rod Seiling, Don Awrey, Mickey Redmond and Red Berenson.

With a new lineup and a new philosophy, Canada evened the 1972 Summit Series at one win apiece with a solid 4-1 victory against the Soviet Union in Game 2.