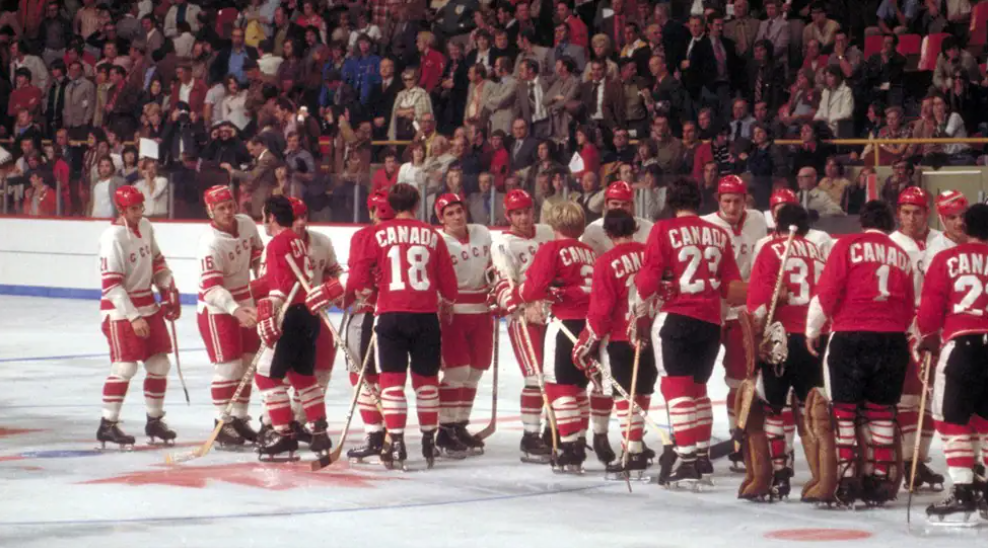 Players shake hands after a hard-fought 4-4 tie in Game 3 of the Summit Series in Winnipeg on Sept. 6th, 1972. (Photo courtesy of The Hockey Hall of Fame).

Game 3 of the series was played in Winnipeg, Canada where  9,800 fans who packed Winnipeg Arena on the night of Sept. 6, 1972, had to wonder which Team Canada they would see — the one that was shelled in Montreal or the one that dominated Game 2 in Toronto.

Team Canada was left frustrated in a stalemated in Game 3 of the 1972 Summit Series after the Soviet Union twice overcame two-goal deficits to leave with a 4-4 tie.

Soviets, who tinkered with their lineup. Coach Vsevolod Bobrov’s best move was his decision to reunite the trio of Alexander Bodunov, Yuri Lebedev and center Viachaeslav Anisin, who had helped the Soviet junior team dominate the 1971 World University Games in Lake Placid. The “Kid Line,” as it was dubbed by the Canadian media, wound up having a major say in the outcome.

After the game, Sinden took a lot of heat from the press for his team’s failure to dominate the series. But rather than criticize his players, Sinden paid tribute to the Soviets, who had surprised almost everyone with their showing in the first three games.

“Do the Soviets compare with the NHL’s best?” someone asked.

“As good as the Boston Bruins?”

“Yes sir,” Sinden said, comparing the Soviets to the franchise he had coached to the 1970 Stanley Cup. “As good as the Boston Bruins.”

After a pause, he added, “After all, whoever told us that we in Canada know all about hockey, except ourselves.”