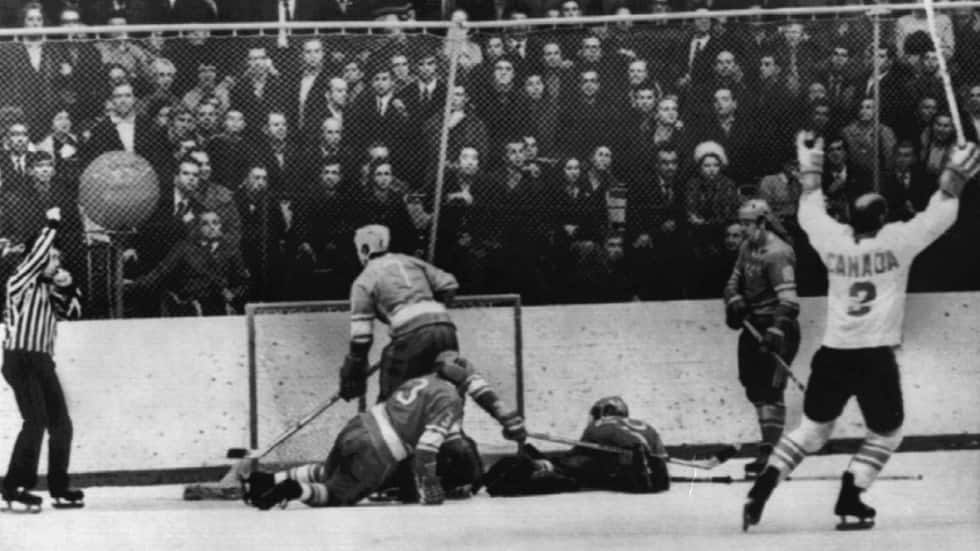 Momentum was clearly on Canada’s side after back-to-back wins in Game 6 and 7, but it still had to win Game 8 to claim victory.

After a controversy over the referees nearly resulted in cancellation of the game, the teams skated onto the ice side-by-side for the final set of pregame ceremonies. Canada’s concerns about the officiating were well-founded when Bill Whiite and Pete Mahovlich received questionable penalties in the first 3:01, leading to a 5-on-3 power-play goal by Alexander Yakushev, who had emerged as a star in the series and backhanded a rebound into the net.

J.P. Parise received another questionable call a few seconds later for interference. When he was given the penalty, he went to the box. Then he came out of the penalty box, skated around and worked himself up. And then he charged the referee, with his stick over his head — he was threatening to bring down his stick on the West German referee Kompalla .

Parise was given a misconduct and a game misconduct. And the crowd started up, ‘Let’s go home, let’s go home.’ I think if at that moment, Eagleson had said ‘let’s go,’ the players would have gone off the ice. But he didn’t, so we carried on. The incident fired up Canada.

Paul Henderson’s goal for the ages in Game 8 capped a stunning Canadian comeback over the Soviets to win the 1972 Summit Series.