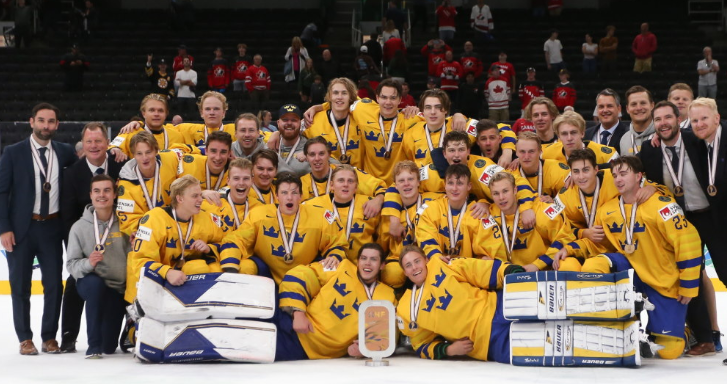 Buoyed by goalie Jesper Wallstedt’s 27-save performance, Sweden beat Czechia 3-1 to win the bronze medal at the 2022 IIHF World Junior Championship in Edmonton on Saturday.

“It was a tough loss yesterday,” said Swedish captain Emil Andrae of falling 1-0 to Finland in the semi-final. “We had to re-group and come together and we talked about having a responsibility to our country. Of course, it was for Tomas Monten, too. It was his last game. We had to do it for him. He’s had six years of grinding, so I’m happy to get a bronze medal for him. He’s a good coach. That’s what this last game was all about.”

To be going home emptyhanded is a genuine disappointment for the Czechs. Everything came together for them when they ended the U.S.’s reign as World Junior champions with a 4-2 quarter-final shocker. However, the host Canadians overpowered coach Radim Rulik’s boys 5-2 in the semi-finals. The Czechs just didn’t have enough left in their tank to top Sweden.

“It wasn’t hard to get up for the game,” Gut said. “We were playing for a medal. It doesn’t matter if it was gold or silver or bronze. We haven’t won a medal for 17 years, so we wanted anything. We were ready to play today.”

Both teams opted for the starting netminders that carried them into the medal round, and Wallstedt more than held down the fort versus Tomas Suchanek. Final shots favoured Czechia 28-23.

“For me, it’s my last junior game, so I also wanted to finish with a medal,” Wallstedt said. “We wanted gold, but bronze is quite good, too. Right now, the feeling is just as good as winning a gold. We’re so happy, and finishing the last game with a medal makes the traveling back home much easier.”

The Swedes didn’t have an easy time scoring in these World Junior playoffs. They edged Latvia 2-1 in the quarter-final before getting blanked by Finland in the semi-final.

The bronze medal game promised to be a defence-first struggle, and it was. The Czechs fared best against tournament powerhouses by taking away time and space in the neutral zone, while Sweden has come close to overdoing it in the patience department at these World Juniors.

Both sides came out hustling hard, but with little to show for it. Swedish captain Emil Andrae rang one off the post during the first Czech penalty to defender Stanislav Svozil.

Lysell opened the scoring at 14:22 on a dynamic solo rush, fighting off Jiri Tichacek’s check on the right side and looping behind the net to surprise Suchanek with a wraparound. It was Lysell’s second goal of the tournament. The 19-year-old Frolunda product, a 2021 Boston Bruins first-rounder, had 22 goals and 62 points with the WHL’s Vancouver Giants last year.

With 6:38 left in the middle frame, stud Swedish defenceman Simon Edvinsson was sent off for tripping. It took Czechia just eight seconds to tie it up with the man advantage. Off the faceoff in the Swedish end, Jiricek floated a wrister from the blue line that deflected off Gut and fooled Wallstedt, trickling past his right pad.

Less than three minutes later, Sweden regained the lead, likewise off an offensive-zone draw. Theodor Niederbach won it and Rosen jumped into the slot with the puck. As Jiricek turned to block the shot, Rosen used him as a decoy to zing his fourth goal of these World Juniors past Suchanek.

Rosen praised Sweden’s mentality for this third-place showdown: “We said to ourselves, ‘We have to decide if we want to win a bronze or not.’ I think we had a pretty good game today.”

Wrapping up the middle stanza, the teams vigorously traded chances. Jakub Kos slammed one off the iron to Wallstedt’s right, and Suchanek came across with the blocker to stymie an incoming Niederbach.

About 3:30 into the third, Wallstedt foiled Kos from the slot to keep it 2-1 Sweden. After Andrae went off for slashing, the Swedish goalie stayed sharp, sliding across to block a Jiri Kulich PP one-timer.

At the other end, Oskar Olausson sifted through a pair of Czech defenders and barely failed to beat Suchanek for a third Swedish tally. Mid-period, the Czechs squandered another power play after Andrae flipped the puck over the glass in his own zone for a delay-of-game minor. Kos set up Matous Mensik for a fabulous look in front, but again, Wallstedt said no.

With 3:26 left, Sjodin, taking a nice pass on the rush from William Wallinder, beat Suchanek stick-side from the right faceoff circle to make it 3-1. At last there was some breathing room for the blue-and-yellow team.

Suchanek came out for the extra attacker just moments later, but all the Czech pressure was for naught. A mini-scrum erupted in the Swedish end at the buzzer, momentarily interrupting the bronze celebrations.

“We really didn’t want to leave Edmonton without a medal,” Wallstedt said. “We came out today full of confidence and wanted that medal maybe a little bit more than the Czechs.”

Sweden will look to break another long gold medal drought at the 2023 World Juniors (Halifax and Moncton, 26 December to 5 January). Despite their deep talent pool, the Swedes have won the tournament just twice (1981 in West Germany, 2012 in Calgary).

“We have a bronze medal, not a gold medal, so probably it wasn’t a successful tournament,” Andrae said candidly. “That was our target. It’s a tough event, physically and mentally. We had our ups and downs. We did our best.”