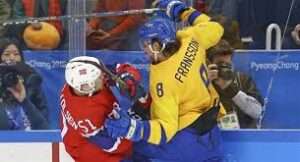 The Swedes are the defending world champions and they played like it on Thursday, leveraging a strong first period to dispatch Norway 4-0.

Viktor Fasth produced an 17-save shutout in his Olympic debut. Par Lindholm notched the game winning goal early in the first period, and Linus Omark impressed with three assists.

“I think we’ve been waiting for this game a long time now,” said Fasth. “To get it out of the way and get going in this tournament, it’s great for us.”

The first shot of the game was also the first goal, Sweden’s Lindholm whipped a wrister beyond a motionless Lars Haugen. The sweet set-up from Omark deserved applause, with Oscar Moller getting the other assist.

Omark was encouraged by his three-point night, “I can do better, of course, like the whole team, but it’s a good start,” said the former Edmonton Oilers and Buffalo Sabres forward.

And in this way, drenched with Swedish prowess, is how the first period would roll on.

The overwhelmed Norwegians managed their first shot on goal just before the 15-minute mark, but it was a lob into the glove of Fasth.

“We were a little bit passive in the defensive zone,” said Norwegian alternate captain Patrick Thoresen, “We were not able to get the puck up in their zone and play some offense. That was our big problem, especially in the first period.”

Sweden’s second goal, tallied by Anton Lander, came off quick pressure to the slot, and a juicy rebound after a hard shot from Simon Bertilsson.

The first period ended with Sweden ahead 2-0, having outshot their opponents 14-1.

Encouraged by their poor initial 20 minutes, the Norwegians were much better to begin the second period.

However, at 7:29 of the middle frame, Tommy Kristiansen took a cross-checking penalty and the weight of the required penalty kill harpooned Norway’s momentum. The rest of the period was mired in penalty issues.

Then, Norway’s Kristian Forsberg caught Joel Lundqvist’s skate under the visor late in the second period, sending him to the dressing room clutching a bloody towel to his face. His team outshot the Swedes 12-6 in the second period but still found themselves down 2-0.

The closest the Norwegians would come to scoring was at 13:48 of the third period, with the Swedes leading 2-0, when Mathis Olimb stumbled backward into Fasth, knocking the Swedish goalie down. Ken Andre Olimb capitalized on his older brother’s ill-fated play, but the goal was overturned after a coach’s challenge and review.

Sweden added two more later in the period, Dennis Everberg flying off the bench, and a point shot from Mikael Wikstrand.

The Swedes meet the Germans on Friday, next up for Norway it’s a game with Finland, also on Friday.