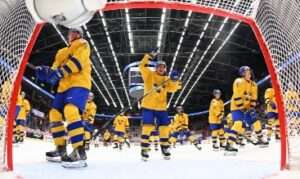 Sweden trailed after the first period but bounced back to beat Finland 3-2 in the 2020 IIHF World Junior Championship bronze medal game on Sunday.

Samuel Fagemo stepped up with a goal and an assist, and Rasmus Sandin and Linus Oberg, with the second-period winner, also scored for Sweden.

Sunday’s selection of starting goalies indicated that both Swedish coach Tomas Monten and Finnish coach Raimo Helminen took this third-place showdown seriously. Sweden was coming off a heartbreaking 5-4 overtime loss to Russia in the semi-finals, while Finland’s reign as champion ended after falling 5-0 to Canada.

This was Sweden’s first bronze medal since Saskatoon 2010 under coach Par Marts. The Swedes now have six bronzes all-time. Monten, with four tries, now has another medal to go with 2018’s silver in Buffalo.

Despite outshooting Sweden 34-26, the Finns failed to medal in consecutive years for the first time since they followed up 2001’s silver with three bronzes in a row.

ABBA once released a greatest hits collection called ABBA Gold, but never one called ABBA Bronze. But you can bet that if they had, it would still have been pretty good, similar to this game. It provided an entertaining, back-and-forth gold medal game warm-up for the heavily Canadian crowd of 7,954, despite brimming with penalties.

Puistola drew first blood at 8:22 when Kim Nousiainen pivoted to center the puck from the left faceoff circle, and it went in off Puistola’s right skate for his team-leading fifth goal of these World Juniors. The Swedes called for a video review, but it was quickly ruled good.

Nousiainen was off for holding when the Juniorkronorna drew even at 12:08. Sandin, who had four points in the 5-4 overtime loss to Russia in the semi-finals, added his third goal and 10th point overall on a rising wrister from the high slot that hit Annunen’s water bottle.

After the teams exchanged fruitless power plays, Maccelli picked off Nils Hoglander’s cross-ice pass at the Swedish blue line and beelined in to beat Alnefelt high to the blocker side with one minute left in the first.

In the second period, the Swedes seemed unfazed by Maccelli’s goal, but couldn’t buy a goal in the first half. Albin Eriksson rang one off the cross bar. Finally, Fagemo (who else?) busted to the net on an odd-man rush and converted the rebound at 10:34 after Annunen had denied Hoglander with his glove. It was the Los Angeles prospect’s tournament-leading eighth goal.

At 13:19, Oberg put Sweden up 3-2 with a goal Annunen would like to have had back. His bad-angle shot from the corner hit the surprised Finnish goalie’s left skate and went in.

Helminen’s team put itself behind the eight-ball with three consecutive minors in the third. The Finns tried to push back with under 10 minutes left in regulation and Philip Broberg off for holding the stick, but there was nothing doing.

With Annunen pulled for the extra attacker, Alnefelt made a game-saving glove stop on Finnish captain Lassi Thomson with seven seconds left.

While three of Finland’s five all-time World Junior gold medals came in the 2010’s, the Swedes still have only two titles (1981, 2012), and they’d enjoy adding another one instead of continuing to hear about their record-setting streak of 52 preliminary-round wins.

Both of these elite nations will be looking to take it to the top at the 2021 IIHF World Junior Championship in Edmonton and Red Deer, Alberta.