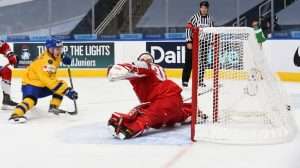 Sweden broke open a 1-1 game with a dominating second period which included the only three goals of the middle 20 minutes, skating to an impressive 7-1 win over the Czech Republic.

It was the first game for both Group B teams and extended Sweden’s remarkable streak of wins in the preliminary round to 53, dating back some 14 years.

The last time the Czech U20 team beat Sweden was nearly two decades ago, December 31, 2002, after which followed a streak of now 12 Sweden wins.

The Czechs have a little more than 24 hours to recover before playing Russia tomorrow night, while the Swedes have a day off before facing Austria on Monday afternoon.

The Czechs gave Sweden all it could handle in the first, going end to end with the favourites and opening the scoring on a power play at 10:14. The goal came courtesy of a nice three-way passing play between Michal Teply, along the left-wing boards, Jaromir Pytlik, stationed to the side of the goal, and the scorer, Jan Mysak, who snapped the pass from the back-door side to beat Hugo Alnefelt cleanly.

The ink was barely dry on the recording of that goal when Arvid Costmar had a clean break, but he was stoned by Nick Malik in the Czech goal. On the same sequence, though, defenceman Victor Soderstom made a brilliant pass from the point to Costmar, driving to the net, and Costmar tipped the puck deftly past Malik just 32 seconds after Mysak’s goal, tying the game at one.

Teply thought he had given his team a lead a few minutes later when his quick shot from in close was headed inside the short-side post, but Alnefelt got his glove over and made a sensational save.

Replays looked like the goalie might have made the save with his glove behind the red line, but video review failed to provide an angle to substantiate that theory, and the call on the ice stood—no goal…great save.

Special teams played an important role as the game changed in the second. The Swedes went ahead 2-1 on the power play when Malik overplayed Simon Holmstrom’s shot from the slot. The puck went wide and came out the other side where Albin Sundsvik tucked it in before the goalie could get over.

Less than three minutes later, they extended their lead on a short-handed goal. A clearing puck bounced over the stick of Czech defenceman Martin Has pinching at the Swedes’ blue line, and Emil Heineman scooped up the puck and dashed the length of the ice, beating Malik with a shot between the pads.

And then Sweden made it 4-1 at 16:05 on a similar play to Sundvik’s goal. This time it was a wide shot by Philip Broberg that bounced out the other side to Theodor Niederbach, who again had the open net after Malik overplayed the original shot. It was the third assist of the period for Broberg, who is playing in his third World Juniors and was drafted 8th overall by Edmonton in 2019.

By the third period the Czechs had nothing in the tank, and the Swedes were overpowering. Elmer Soderblom made it 5-1 early in the third with highlight-reel hands on the power play. He got the puck at the top of the crease and puck it between his legs, along with his stick, and scored off the far post.

They made it 6-1 at 12:22 thanks to a nice pass by Tobias Bjornfot as he circled the net, Oscar Bjerselius, finishing the play. Noel Gunler closed out the scoring with another power-play score at 17:37.