Sweden Holds on to Advance to World Junior Finals 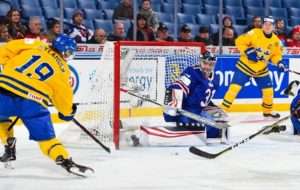 Sweden will play in the 2018 World Junior finals after a strong 4-2 victory over the United States on Thursday.

The first half of the contest was mostly defensive, with the teams combining for just 19 shots in 30 minutes. Joseph Woll was the star of the battle, however, making a couple huge saves, including a right foot save on Isac Lundestrom two minutes into the second.

The Swedes had five previous power play goals this season, so the last they were going to do was let the Americans off scot-free. At 33:30, Vancouver Canucks prospect Elias Pettersson make it 1-0 after sniping a fast shot past Woll’s glove, using his extra room to his advantage.

Sweden was simply outplaying the United States with the puck, despite the Americans taking more shots. New York Rangers forward Lias Andersson, who sat out against Slovakia on Tuesday, scored after an incredible passing play between him and Timothy Liljegren at 46:17, beating Woll’s blocker to make it 2-0.

Woll was having a good game, but three goals on four shots prevented him from finishing in the crease. At 7:47 in the third, Oskar Steen unleashed a tremendous wrist shot, scoring shorthanded to make it 3-0. Then, 38 seconds later, Axel Jonsson Fjallby did a very similar move, using a defenceman as a screen before he sent a wrist shot over Woll’s glove to chase him from the net in favour of Jake Oettinger.

The Americans still had time to get something on net, and Kieffer Bellows got them on board. With 12:24 done in the game, Bellows finally found a way to beat Filip Gustavsson on the power play, making it 4-1.

With an empty net and just over three minutes to go, the American sscored again. Brady Tkachuk would get it after tipping it in with the extra man, forcing Sweden to play extra defensively. The goal did nothing to change the course of the game, however, resulting in Sweden taking the 4-2 victory and eliminating the Americans from gold contention.

With the victory, Sweden will play the winner of Canada and the Czech Republic tomorrow night at 8:00 PM at the KeyBank Center. For the Americans, the team is looking for just their second medal in six tries at home, while Sweden is looking to win their first tournament since 2012 and their first in the United States, having finished second in 1989 and 1996. They also bring a perfect record to the finals, giving them momentum after years of misery.