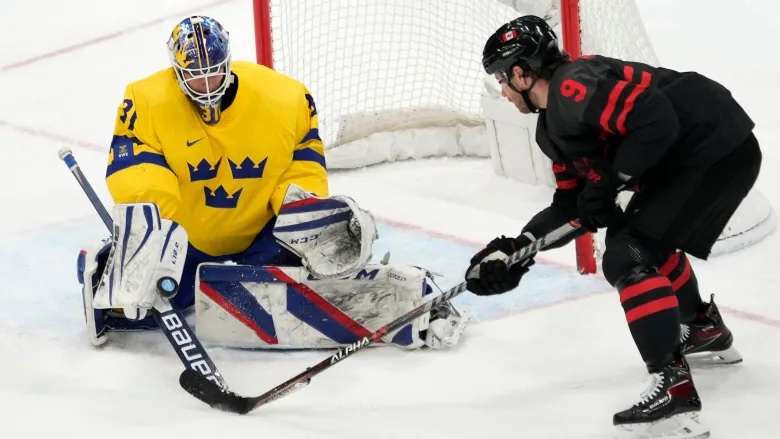 By Joshua Clipperton – The Canadian Press

Canada is heading home from the Olympics without a men’s hockey medal for the first time in 16 years.

Lucas Wallmark scored midway through the third period as Sweden defeated Canada 2-0 in the quarter-finals at the Beijing Games on Wednesday.

Lars Johanssen made 22 saves for the Swedes, who will meet the Russian Olympic Committee on Friday in the semifinals. Anton Lander added the clincher into an empty net.

Matt Tomkins made 24 stops for Canada.

Wallmark’s winner came off a sloppy sequence for the Canadians where Andrew McBain and Eric O’Dell couldn’t get the puck out of the defensive zone. Wallmark stripped the latter and fired a shot off Tyler Wotherspoon’s stick and past Tomkins with 9:45 left in regulation.

Canada tried to press, but Lander iced it with Tomkins on the bench for an extra attacker with under two minutes to go.

The goal tied Wallmark with Slovakia’s Juraj Slavkovsky for the tournament lead with five.

Thursday marked the countries’ first meeting at the Olympics since the 2014 gold-medal final in Sochi when Canada beat Sweden 3-0.

NHLers did not participate due to COVID concerns

That also marked the last time NHLers took the ice at a Games.

The league skipped the 2018 event for financial reasons before withdrawing from 2022 because of COVID-19 concerns that forced dozens of postponements and battered its December schedule.

Sweden advanced to the quarters in Beijing as the No. 4 seed, while Canada had to play an extra game — a 7-2 victory over China — in Tuesday’s qualification round after finishing fifth of 12 teams in the round robin.

Canada won Olympic gold with its NHL players in 2010 and 2014 before securing bronze four years ago with a roster of mostly European-based professionals. The country’s NHLers lost in the quarters to Russia in 2006 after topping the podium in 2002 for the first time in 50 years.

Despite winning three of its four games heading into Wednesday night at National Indoor Stadium — including two victories over a Chinese program making its Olympic debut as hosts — Canada never really got going in Beijing.

Mason McTavish, the No. 3 overall pick by the Anaheim Ducks at the 2021 draft, had just one assist despite playing on the top line with Eric Staal, who’s looking for an NHL contract, but like his team, failed to impress for much of the tournament.

Josh Ho-Sang — viewed as another offensive threat ahead of the tournament — started alongside Staal and McTavish, but was demoted to the 13th forward spot after two games.

Owen Power, the top pick in 2021 by the Buffalo Sabres, had some early struggles, but grew into the tournament as games progressed on the top defence pair.

The Canadians lost to the United States in round-robin play, which forced them to suit up for the qualification round against China. Canada got the job done, but was unconvincing, especially early, before having to play the rested Swedes just 24 hours later.

While the Swedes will play the ROC in one semifinal, Slovakia, which stunned the United States with a 3-2 shootout win in the quarter-finals, will meet Finland in the other semi.

And while Tomkins and Edward Pasquale were mostly solid in goal, the fact Devon Levi — the MVP of the 2021 world junior hockey championship putting up big numbers in the NCAA — didn’t see a minute of action raised eyebrows both in China and back home.

“An amazing experience, incredible honour to be here at the Olympics and have the chance to wear the Maple Leaf and represent the country. That’s something I’ll remember the rest of my life,” Tomkins said following the loss.

Tomkins, a 27-year-old from Edmonton in his first season with Frolunda of the Swedish Hockey League, had to make a good save after Canada iced the puck seven seconds into the first period.

The North Americans came out hitting on the smaller NHL-sized ice, but the Swedes didn’t back down in delivering their fair share in return.

Canada killed off a penalty for an overzealous McBain hit, while the Swedes did the same later in the period against a power play that connected four times Tuesday against China.

The grinding chess match continued into the second before Sweden had a couple chances where Tomkins once again had to be sharp.

The Canadian netminder stopped Pontus Holmberg on the doorstep before also denying Lander, who played 215 games with the Edmonton Oilers, with his blocker.

Johansson didn’t have a lot to do through 40 minutes at the other end, but had to scramble on a point shot that struck his blocker and was briefly loose behind Sweden’s goaltender before he smothered the puck.

Landon Ferraro skated on the third line for Canada in his first action of the tournament after Ben Street took an awkward hit from Chinese captain Brendan Yip late in the qualification-round game.

The gold-medal game is slated for Saturday at the National Indoor Stadium.