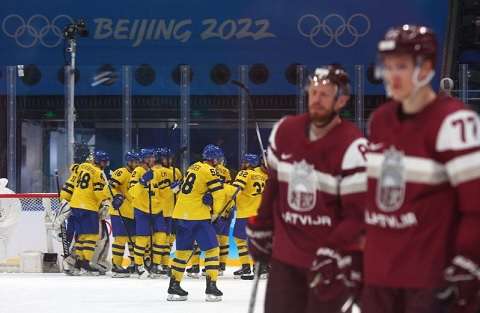 Sweden survived a gritty Latvia fightback, holding on to claim a 3-2 win in their Beijing Olympics men’s ice hockey opener on Thursday that had both teams skating off believing the same thing – the gold medal is up for grabs.

With National Hockey League pulling out of the Beijing Games due to a COVID-19 surge that created havoc with its schedule, the Olympic tournament has no clear favourite and the early action at the National Indoor Stadium has underscored just how wide open the medal hunt is going to be.

The first three games have all been decided by a single goal, including one major upset that saw Olympic Games debutant Denmark shock the Czech Republic 2-1.

“Watching the games yesterday anything can happen,” Sweden forward Fredrik Olofsson told Reuters. “You can’t take anything for granted, everyone has a shot at it (a gold medal) it is just making sure you are dialled in every game because there aren’t that many, you’ve got to make them count.”

Sweden, gold medal winners at the 1994 Lillehammer and 2006 Turin Olympics, had looked poised for a straight-forward decision against Latvia, grabbing a 3-0 lead midway through the second on two goals from Lucas Wallmark and other from Anton Lander.

But Latvia would hit back with powerplay tallies from Renars Krastenbergs and Nikolajs Jelisejevs to send the game to a nervy finish.

“The big challenge for the medal starts today but this was only the first battle. We couldn’t win a medal and we couldn’t lose medals today so we are in it like any other team,” said Latvian captain Lauris Darzins.

“We are going to stay positive. It’s a 10-day tournament so we are in it, we’re not just going to be crying on the bench.

“A lot of things can happen in one game.”