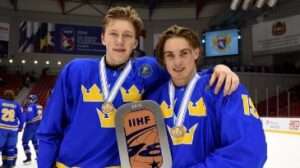 Nils Hoglander (left, with Fredrik Granberg) was Sweden’s biggest offensive threat as the team won an U20 Four Nations tournament in Finland in preparation for the World Juniors

Sweden came out on top in the U20 Four Nations tournament played in Finland over the weekend. The Tre Kronor juniors had 2-1 wins over Finland and the Czech Republic, as well as an emphatic 6-1 victory against Russia.

That Russia game was the highlight of a generally low-scoring tournament. The teams traded first-period goals, but Sweden took control in the second thanks to two goals from Nils Hoglander. Three more unanswered strikes in the final frame secured the biggest win of the competition.

Surprisingly, though, Russia recovered to take second place thanks to a 5-2 victory over the Czechs on the final day. Two goals for Metallurg prospect Nikita Rozhkov led the way, and there were also contributions from Lokomotiv’s Grigori Denisenko and another Metallurg youngster, Pavel Dorofeyev.

Hoglander and Rozhkov were among a clutch of players to finish with three points; Rozhkov and Czech forward Jan Sir were the leading goal scorers, with three each. Sweden’s Hugo Alnefelt was the top goalie, allowing just two goals in his two appearances for a save ratio of 96.36%.

At the foot of the table, the Czechs edged third place ahead of Finland thanks to Sir’s winner 18 seconds into overtime after the teams shared a 1-1 tie in regulation.

Switzerland took first place in Piestany – but only by the narrowest of margins. The four-team tournament saw the Swiss in a three-way tie with Slovakia and Germany on six points, and the Alpine nation prevailed by virtue of a two-goal margin in its victory over the host on the opening day. The other games between those nations finished 3-2, giving Switzerland the lead by a single goal in the three-way head-to-head. Norway lost all three of its games and finished last in the group.

The second period was the crucial passage in the opening game, with Switzerland building on a 3-2 lead and adding further goals from Sandro Schmid and Noah Fuss. That put the game beyond Slovakia, which could only muster a solitary reply in the third through Martin Chromiak. However, after easing past Norway 2-0, the Swiss lost 2-3 against Germany after two late goals. That meant the final game, between Slovakia and Norway, would be crucial. A Slovak win in regulation would force a three-way tie and give Switzerland the honours; any other result would see Germany take top spot by virtue of a head-to-head advantage against the Swiss. Despite an early Pontus Finstad goal putting Norway in front, Slovakia responded to win 4-1.

Switzerland’s Gian-Marco Wetter topped the tournament scoring with 4 (1+3) points, while Slovakia’s Eugen Rabcan was the pick of the goalies, allowing just one goal and stopping 95% of the shots he faced.

Belarus took first place on home ice in Bobruisk as it warms up for next month’s U20 World Championship Division I Group A in Minsk. The host took the honours thanks to a 5-1 win over Denmark in Sunday’s decisive game. That comfortable scoreline was something of a surprise: in the earlier two games, Belarus had edged one-goal margins over Latvia (1-0) and Austria (2-1), while the Danes had scored eight goals against the same opposition.

In the tournament decider, though, Belarus made a fast start. Goals from Nikita Pyshkailo, Alexander Palchik and Yegor Buyalski opened a 3-0 lead inside 13 minutes. Denmark pulled one back through Mikkel Jensen, but nothing would stop the home team from cruising to a big win.

Head coach Dmitri Dudik admitted that he had worried for his team, especially since the game was broadcast live on Belarusian television but added that he was pleased with the way the players coped with the pressure and paid tribute to the home support. His opposite number, Olaf Eller, blamed mistakes early in the game for his team’s defeat. “We play well with the puck, but we also need to learn to play when we don’t have it,” he added.

France hosted a four-team tournament in Vaujany and came out on top thanks to a convincing 5-0 victory over Italy on the final day. That was enough to keep the French clear of Slovenia, despite suffering an overtime loss against Hungary on Saturday. Les Bleus had defeated Slovenia 4-2 in the opening game of the tournament. Hungary took third place, one point ahead of Italy. The Italians were unable to build on a shoot-out win over Hungary in their first game.

Belarus B wins in Ukraine

While Belarus U20s were winning on home ice, the Minsky Zubry were representing the country at a four-team tournament in Ukraine. The team, effectively the Dynamo Minsk juniors, won all three games in Brovary. First it defeated Poland 3-2, then it edged Lithuania 2-1. In the final game of the competition, the Belarusians came from 0-2 down to beat the host nation 3-2 and complete a perfect record. The Poles took second place, helped by a 5-1 win over Ukraine. An opening shootout win over Lithuania kept the host nation off the foot of the table.