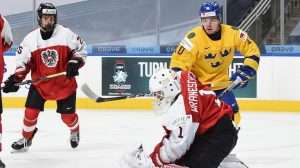 Sebastian Wraneschitz couldn’t do it alone. The Austrian goalie was sensational, but the entire Swedish team wore him down during the course of its 4-0 win over their underdog opponents.

The result leaves Sweden 2-0 and in first place in Group B and extends the team’s crazy win streak in preliminary round play to 54. Austria is now 0-2 and looking more and more like the team that will miss the quarter-finals on this side of the draw.

Hugo Alnefelt got the shoutout by stopping only six shots, tying the record for the lowest total shots by a team in a U20 game. Wraneschitz faced 65 shots in defeat, and the Swedes didn’t take a penalty all night. It was as one-sided a game as you’ll see.

The schedule doesn’t get any easier for Austria, still looking for its first ever win in U20 history, as they face Russia tomorrow. Sweden has a day off before taking on those same Russians a day later.

“We played way too much in our end, and we allowed way too many shots. Our goalie was great, but we have to play a simpler game and create some of our own chances,” said Austrian captain Marco Rossi.

Although Sweden managed only one goal in the opening period, it outshot Austria 22-1 and had the puck in the offensive end virtually the entire period. That lone goal came towards the end of a power play when Noel Gunler wired a shot over Wraneschitz’s shoulder. The puck went in and out so quickly video review was required to confirm the score at 17:45.

While Wraneschitz continued to block shot after shot in the second, Tim Harnisch created two great scoring chances for Austria in the period, one early, one late. First, he split the defenceman and deked Alnefelt, only to lose control of the puck and failed to get a shot off. Near the end, he made a great steal at centre and went in alone, only to shoot the puck wide as he was being pursued.

In between, Sweden scored two more goals, the first on another power play. Victor Soderstrom’s low point shot from the middle of the ice deflected off the skate of Theodor Niederbach at 4:36 to make it 2-0, and six minutes later they added to their tally off the rush.

Simon Holmstrom made a nice backhand pass to Gunler, who wired a shot over Wraneschitz’s glove and in, his second of the night and third of the tournament.

Austria barely maanged a shot the rest of the game, while the Swedes made it 4-0 at 12:37 of the third. This came off a nice pass by Alexander Holtz to Lucas Raymond in front. Raymond beat his man to the puck and redirected it into the open cage.