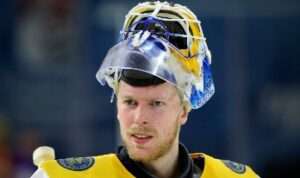 Sweden’s Magnus Hellberg led all goaltenders in save percentage

The third leg of the 2019/20 Euro Hockey Tour stopped in Stockholm, Sweden for the Beijer Hockey Games. The host Swedes took the maximum nine points from three games. They were followed by the Czech Republic with five points, Finland with three and Russia with one.

Entering the weekend’s final game on Sunday night, Finland had an opportunity to beat Sweden and win the tournament. However, before at crowd of 12,166 at the Ericsson Globe, the Swedes built up a 3-0 lead in the first period before cruising to a 5-1 win. Linus Johansson scored the game’s first and last goals, while five Swedes topped the tournament in points. Mathias Brome and Marcus Nilsson had four points each while Samuel Fagemo, Lukas Bengtsson, Fredrik Handemark and Finn Julius Junttila had three each. Handemark, captain of the SHL’s Malmo Redhawks, is the EHT’s overall scoring leader this season with six points in nine games.

Fagemo’s goal against Finland was his second for the Swedish senior men’s national team in as many career games. After winning the Champions Hockey League final with Frolunda Gothenburg on Tuesday, the top scorer of this year’s World Junior Championship didn’t play in Sweden’s first game against the Czechs on Thursday but scored his first goal in his men’s national team debut on Saturday in a 5-2 win over Russia.

“Everything’s happened so quickly and I’ve just tried to enjoy it the best I can,” Fagemo told hockeysverige.se before Sunday’s game. “It’s fun to score goals and it was great to contribute, and I hope another good game can help us win on home ice.”

Fagemo isn’t the only former World Junior player to score his first two senior men’s international goals this weekend. Earlier on Sunday, the Czechs secured second place with a 4-3 shootout win over Russia. Defenceman Jan Kostalek of Sparta Prague scored twice in the third period, including the equalizer at 59:58 to force overtime.

“I took a shot, Keba (Jakub Jerabek) drove to the net and deflected it on goal, the puck bounced off someone, it came back to me at the top of the circle and all I did was take another whack at it and it went in,” the 24-year-old told hokej.cz after the game. “I was getting lots of shots, so it’s nice that they’re finally going in for me.”

Swede Magnus Hellberg and Czech Dominik Furch were the only goalies to win two games over the weekend, and the pair dominated all goaltending categories, finishing 1-2 in goals-against average, save percentage and saves.

Finland’s three points all came from their opening 3-0 win over Russia, which took place in Helsinki. In his home rink, IFK Helsinki goalie Frans Tuohimaa made 18 saves to record the tournament’s only shutout.

The single point gained in the shootout loss to the Czechs was Russia’s only in the tournament after two straight regulation losses, but denied them a chance to force a three-way tie for second. Neftekhimik Nizhnekamsk forward Pavel Poryadin, 23, scored two of the team’s five goals over the weekend.

With three of four legs complete, Sweden and the Czech Republic are now tied for first place in this season’s Euro Hockey Tour with 16 points each, followed by Finland with 14 and Russia with eight. The last stop will be in the Czech Republic on the first weekend in May, just before the start of the IIHF Ice Hockey World Championship. For that event, the rosters of the four teams will look very similar to the ones they take to Switzerland.

Europe’s top four hockey nations use the Euro Hockey Tour to prepare their men’s national teams for the annual World Championships and the quadrennial Winter Olympics.

Meanwhile, at the Kaufland Cup in Poprad, Slovakia, the hosts beat Belarus 4-3 and the Russian B team 2-1 to finish first. Russia B finished second with three points and Belarus lost both games.

“We played as a team. The players battled for each other,” Slovak head coach Craig Ramsay told hockeyslovakia.sk following the last game of the tournament on Saturday, in which his team scored twice in the first 13 minutes, then held on to beat the Russians. “I think it was our best game of the season.”

The Osterreich Cup took place in Klagenfurt, Austria, with the host Austrians finishing first by beating Denmark 3-2 in the final on an overtime goal by Ali Wukovitz. Denmark never trailed in regulation time and held a 32-22 edge in shots but Bernhard Starkbaum was solid in the Austrian net. The game for third place was a defensive affair, with France beat Norway 2-1 in a shootout.

Finally, Switzerland won two games against Germany in a series called Prospects Games, in which each team tested young players with limited previous experience with their men’s national teams. With no players over 25 on their roster, the Swiss won 4-2 in Herisau and 2-1 in a shootout in Olten.