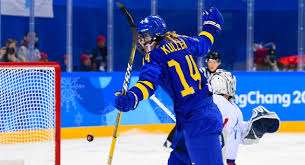 Sweden’s women wrapped up their Olympics with a comfortable 6-1 victory to secure seventh place – but it was a plucky Korean performance that caught the eye at Kwandong Hockey Centre.

The host was unable to pull off the shock win that it had dreamed of, but still made life tough for the Swedes as it recovered from the loss of an early goal to tie the scores through Soojin Han. The game remained live until deep into the second period as Sarah Murray’s team signed off with a performance that offered great encouragement for a roster ranked 22nd in the world and facing the #5 team in the IIHF rankings.

And the sense of pride spilled over at the end of the game. Goalie So Jung Shin – whose stats did not fully reflect the contribution she made behind an overworked defence – was cheered off the ice, while hard-working forward Jingyu Lee was the last to leave the field of play, departing amid a fluttering sea of white and blue Unified Korea flags.

Lee, who battled tirelessly in search of a goal that never quite came, embodied the spirit of a Unified Korean team that deservedly captured the hearts of hundreds of fans who remained on the concourse long after the arena was emptied to support both the athletes and the symbolism of this unique union of North and South.

Randi Heesoo Griffin, scorer of Korea’s first ever Olympic goal during the group game with Japan, was looking forward to tapping into that excitement to support the development of Korean hockey.

“I certainly hope that it keeps people excited about the game and gets more kids playing, because we really need that,” she said. “That’s a huge part of the mission of our team, and that’s something that isn’t changing after these Olympics are over. A lot of girls on the team are involved in coaching kids, and we talk all the time about how we can keep this momentum going for women’s hockey in South Korea.”

Griffin added that, with the off-ice hullabaloo about the Unified Team dying down, it had been fun playing the final game in front of a large crowd “of people who were here for the hockey and here to support us”.

For Sweden, a country that came here with medal ambitions, this was absolutely not the game it wanted to be a part of – and at times it showed. Korea, eager to wrap up its Olympics on a high, was out to exploit any lethargy on the opposition’s part, and for a time there was even a possiblity of a major surprise.

Fanny Rask acknowledged that it had been a chastening couple of weeks in Gangneung after her team finished in seventh place. “It’s kind of hard, because we worked really hard for this,” she said. “It’s not the tournament that we expect from ourselves. We have higher expectations from ourselves. It’s really hard. I’ve tried not to think about it too much because it will be really, really hard when you know how much you’ve put in.”

The Koreans could, maybe should, have opened the scoring here. A 5-on-3 advantage for 50 seconds early in the game was the perfect platform to get the host ahead. Instead, though, the chance went begging: Korea failed to test Minatsu Murase in the Swedish net, and came no closer than a Lee slapshot that flashed just wide.

If you don’t score on them, they’ll score on you. Sweden, back to full strength, wasted little time in proving the truth of that old adage. Rask sent Sabina Kuller away into oceans of space on the left-hand flank; Kuller relished the opportunity to thump home her first goal of the Games in the sixth minute. With Korea’s proven lack of firepower, it felt like an early end to the competitive action.

But another Swedish penalty transformed the mood as Korea snatched a tying goal. Captain Jongah Park made it, darting behind the net from the left channel then sending a fine pass back in the direction she came for Soojin Han to squeeze in a shot from a tight angle. It was a moment to cherish: a quality goal to delight the home crowd, and for the first time in this tournament, Korea had played itself back into a game.

It nearly got even better. Lee robbed defender Johanna Olofsson deep in Swedish territory and went straight to the net, only to clip the outside of the post. There was a growing feeling that the shock might just be on.

That dream took a beating late in the opening frame as Sweden converted a power play chance. Korea struggled to clear the puck from its zone, and when play came back to Emmy Alasalmi on the point, she fired home a delicious one-timer to reinstate the Swedish lead.

Once in front, Sweden’s confidence increased and Shin was by far the busier goalie in the second period. Korea managed just two shots on goal in the middle frame as the pressure piled up around Shin’s net. The host was not afraid of the dirty work though, with Heewon Kim’s willingness to put her body on the line seeing her pick up an injury when a slapshot crashed into her.

In the end, though, the pressure told as Sweden scored a fine goal. Rask, Emma Nordin and Erika Grahm produced a passage of tic-tac-toe that might have come straight out of a Soviet playbook; the bewildered Korean defence was left watching by the time Grahm applied the coup-de-grace to make it 3-1.

Now there was no way back for Korea. Sweden added another goal through Annie Svedin early in the third. Her shot dinged into the angle of post and bar, but a video review confirmed that the puck had crossed the line. Rask, who scored the first goal of the 2018 Olympics, got her second of the tournament when she made it 5-1 with 10 minutes to play before Lisa Johansson wrapped up the 6-1 scoreline late on.

But the emphatic victory could not quiet the questions about where Sweden’s women’s program goes from here. Grahm admitted that there was uncertainity about the future – but sounded a defiant note.

“After this season, we need to think about what happened and then we can look to the future,” she said. “Right now I’m going back home to play with my club team. Hopefully we can end it up better there and after that, I don’t know. But I want definitely more than this.”

Meanwhile, Rask called for more backing for the women’s game. “I think we need support from our clubs and from the federation so that we can focus on just playing hockey and not worry about our future,” she said. “So we can just focus on getting better and have time to rest and not be stressing out about life itself.”