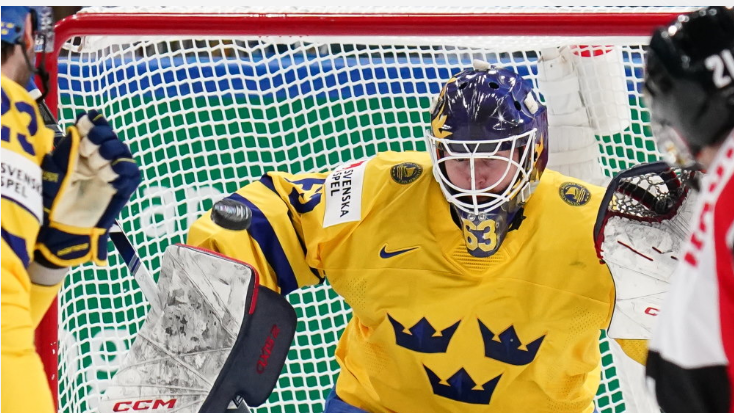 Marcus Hogberg had a strong tournament in the Swedish net at the Karjala Tournament in Finland.

In international men’s ice hockey the season for reigning World and Olympic champion Finland started on home ice in Turku with the Karjala Tournament. But this time it was not the Finns but Sweden, which took first place ahead of newcomer Switzerland.

The Swedes under new head coach Sam Hallam had a successful start into the Euro Hockey Tour by first winning the break-out game in Ceske Budejovice against home team Czechia 4-1. It was the show of Andre Petersson, who hasn’t played a big international tournament since the 2010 IIHF World Junior Championship but scored a hat trick against the Czechs en route to winning the scoring race.

He did it again in what turned out to be the deciding game on Saturday against eventual runner-up Switzerland. His goal after six-and-a-half minutes deflecting a Par Lindholm shot opened the scoring for Tre Kronor in the match-up of the 2013 and 2018 Worlds finalists. Switzerland showed an improved performance as of the second period and tied the game with a power-play goal from Damien Riat. During the third period Sweden regained the lead and the Swiss tied it again. An avoidable penalty of the Swiss made things clear in overtime where Jonathan Dalen scored the game-winning goal on the man advantage after 65 seconds. It was Sweden’s ninth win in a row in an international game against Switzerland.

On the last day Switzerland and Czechia, which beat Finland 5-2 in the second game, needed a regulation-time win in their head-to-head game and hope that Sweden would lose the last game to Finland in regulation time to be able to win the tournament.

Like each of Switzerland’s games in Turku, this one also ended 2-2 after regulation time, which meant Sweden was known as tournament winner before the last game. Sven Senteler capitalized on a giveaway in overtime to score the game-winning goal for Switzerland in a game that determined second and third places. Andres Ambuhl, the 39-year-old on an otherwise slightly rejuvenated team, played his 300th international game with the Swiss men’s national team scoring a goal.

In a game that didn’t influence the standings, Finland had a 4-1 consolation win against its neighbouring rival Sweden. However, the Swedes finished first and Finland remained in last place.

“Karjala is always a fun tournament. Three games in four days, that’s always tough but we tried to play solid. Today the Finns were one notch better than us but we still take home the tournament victory, so we’re happy. We played a good game, we could have won. We had a lot of scoring chances but couldn’t score,” said Petersson, who gave a good first impression to the new head coach as scoring leader of the tournament.

Could that open the door to the first IIHF Ice Hockey World Championship participation for him? “We’ll see what he says. I’ll try to do my best and work hard all year and see where it gets me,” he said.

Switzerland impressed with a second-place finish as newcomer to the Euro Hockey Tour thanks to their wins against Finland and Czechia. The Swiss were invited to this small circle of four teams replacing Russia.

“It’s the best that could have happened to Swiss ice hockey. It is important to play against such opponents to make a step forward. We want to show that we belong here, not just because Russia is missing but because we can play hockey well,” Ambuhl said.

“We are incredibly thankful to be here even though the circumstances to be part of are sad. It is enormously valuable for us as a team. It’s a great tournament with strong opponents. We want to be here to win every game, no matter who the opponent is,” said national team head coach Patrick Fischer.

The next Euro Hockey Tour event in December will be hosted by the Swiss in Fribourg.

The Deutschland Cup is another traditional event of the international break in November and it ended up with Germany sweeping through its home-ice event in Krefeld.

The Germans had their toughest challenge on Day 1 against Denmark where Daniel Schmolz scored two goals including the overtime winner in the 3-2 victory. They followed up with 3-0 blankings of Austria and Slovakia.

“A young German team found the way to win the game and the tournament,” Germany head coach Toni Soderholm said. “I’m very proud of what the players showed and how they performed. It was a deserved tournament win.”

Second place went to Austria, which started the tournament with a 3-2 overtime win against Slovakia and ended it with a 3-1 victory against Denmark.

“I’m very happy and very satisfied with the game. We didn’t have much time to regenerate [after the loss to Germany]. We had good discipline and a fighting spirit. It was a great performance, I’m impressed. I think we represented Austria very well,” Austria head coach Roger Bader said.

Denmark had a 4-3 overtime win against Slovakia to finish the event in third place ahead of the Slovaks. Mathias From scored two goals including the game-winner that also lifted him to the top of the scoring stats.

Wins for Latvia, Italy and Poland

Elsewhere, Latvia, the co-host of the 2023 IIHF Ice Hockey World Championship together with Finland, won a Three Nations Tournament in Trondheim. Georgs Golovkovs scored a hat trick in the 6-3 win against host and second-ranked Norway, which was followed by a 3-2 victory against Denmark’s B team.

The six-team Tamas Sarkozy Memorial Tournament in Budapest ended up with a neighbouring rivalry between France and Italy in the final. The French game back from a two-goal deficit but Enrico Miglioranzi scored the 4-3 tournament-winner in the shootout. Ukraine participated in the tournament after the relaunch of the league and beat host Hungary 2-1 in the third-place game thanks to first-period goals from Danil Trakht and Glib Krivosapkin. Japan took fifth place after defeating winless Slovenia.

Poland won the Baltic Challenge Cup in Kaunas thanks to wins against host Lithuania, eventual runner-up Estonia and a Latvian students’ selection.