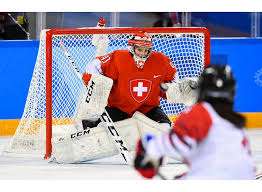 Schelling also leaves these Games as the all-time Olympic wins leader (10) and tied with Canada’s Kim St-Pierre, Sweden’s Kim Martin and Finland’s Noora Raty for the most Olympics among goalies (4). Of course, the 2014 Olympic MVP would have preferred a repeat of the team success of Sochi, where Switzerland earned an historic bronze medal.

“I’m very proud of the team, the way we stepped up after being so disappointed,” said Schelling.

“Right now, winning fifth place really isn’t bad, and probably in a week it will feel awesome to think about getting fifth place in the Olympics,” said Raselli. “But it’s still not a medal.”

Switzerland won both its placement games, including a 2-0 shutout over host Korea by rookie Olympian Janine Alder. There are, naturally, regrets over the missed opportunity in a 6-2 quarter-final defeat against the Olympic Athletes from Russia. But nonetheless, the Swiss women’s program is heading in the right direction.

It was a good tournament for 19-year-old Alina Muller, who leads all skaters with seven goals and 10 points, and Christine Meier, who tops the tournament in points for defenders (8). In fact, Meier’s eight assists are the third-highest ever in one Olympics, tied with Canada’s Cherie Piper (2006). Hayley Wickenheiser set the record with 12 (2006).

Japan matched its sixth-place finish from the inaugural 1998 Olympic women’s hockey tournament on home ice in Nagano. That featured just six teams, and the competition has gotten stiffer in the last 20 years, so the 2018 result is more impressive. Smile Japan, indeed.

“Not the result we were hoping for, but after we didn’t make it through the qualifiers, I think getting to the fifth-place game was a pretty good job,” said Japan’s Akane Hosoyamada. “We should be pretty proud of ourselves.”

“I hope that the younger generations feel that they can keep coming up and competing at this level,” Hosoyamada added. “I hope we were good role models for them and inspired more people to start playing hockey.”

In front of 3,958 fans at the Kwandong Hockey Centre, the Swiss got the start they wanted. Raselli pounced on a loose puck at centre ice and swept in for a breakaway goal at 3:19. Yet clearly emboldened by their first Olympic win over Sweden (2-1 on Sunday), the Japanese kept attacking throughout the first period.

“It was my mistake for the goal, which was hard, and then throughout the game we couldn’t get past their goalie,” said Hosoyamada. “She’s a great goalie. She’s always going to get the first shot. So we have to get coverage in front of the net, get the screens, get the rebounds and we just couldn’t get the second shot on the net today.”

A scoreless second period picked up toward the end as Japan pressed for the equalizer with Sabrina Zollinger in the box for cross-checking. Even with a 7-1 shots edge in the middle frame, the Japanese couldn’t solve Schelling.

The Swiss initially thought they’d taken a two-goal lead about five and a half minutes into the third. Muller smartly centered the puck while sliding on her knees and Stalder put it in the net, but it was waved off as Isabel Waidacher had violated Fujimoto’s crease.

With a display of warrior bravado, Japan pulled its goalie for the extra attacker with 2:12 left. But Phoebe Staenz’s relentless puck pursuit in the dying moments kept the shutout intact. Schelling smiled and pumped her arms at the final buzzer.

“It’s been a great experience to play at the Olympics,” said Hosoyamada. “It was my dream since I was little. I’m so grateful that I was here, a part of this team and this environment, but I hope I’ll get the chance to come back again, maybe in Beijing.”

Switzerland won its second straight game over Japan at these Games. The Swiss prevailed 3-1 in round-robin play on 12 February. Switzerland also has a perfect 8-0 record versus Japan at the Women’s Worlds, dating back to 1990.

Will Schelling be back for a fifth straight Olympics? “I’m not really thinking about my future yet. I’m just happy being here right now, enjoying it and soaking up everything right now.”