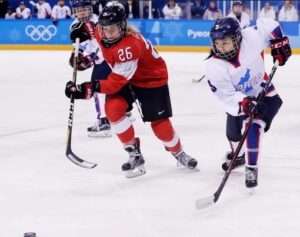 Perhaps the most noteworthy aspect of the game was that Swiss goaltender Florence Schelling was given the day off by coach Daniela Diaz.

Janine Alder started her first senior game, and this was a reward for incredible patience. Alder was the backup at the 2014 Olympics as well as the 2015 and 2017 Women’s Worlds, not playing one minute.

Indeed, Schelling had made an incredible 28 straight starts in OG/WW competion for the Swiss. The last time she didn’t start a game was April 3, 2013, a 13-0 Swiss loss to Canada in which Sophie Anthamatten and Dominique Slongo shared the duties.

“It was a very good experience,” Adler enthused. “It was just awesome to get game time and it all worked out perfectly. It’s one of the best days of my life, getting to play and then having such a good performance from everybody.”

“I wouldn’t say it’s been difficult,” Adler said about being with the team for so long without playing. “You’re always eager to play. You always want to play, but it’s so great being here. It’s great to watch Florence practice, great to watch her play. I’ve learned so much from her, and her confidence on the ice. Hopefully I’ve taken a little bit of that and learned from her. Maybe now I’m ready for that next step and I can bring it on the ice, too.”

For the Koreans, there were some noteworthy achievements. This was the smallest margin of defeat for the team, and their 19 shots tied their personal best.

As well, goalie So Jung Shin was excellent, stopping 49 of 51 shots, many from close range. This was also a team record.

The bitter disappointment of losing the quarter-finals game was still noticeable, but the Swiss pulled together and beat a determined Korean team. The win means the Swiss have qualified for the 5th-6th placement game on Tuesday while the hosts will play in the lower 7th-8th game.

“It was a tough loss yesterday,” Swiss defender Christine Meier acknowledged, “but we knew we had to carry on. The first 20 minutes were pretty hard because we only played yesterday, and we were a little tired.”

The Kwandong Hockey Centre was packed with thousands of schoolchildren waving flags and urging on their team, and although the Koreans had several decent scoring chances, they couldn’t do enough to pull out a victory.

They did play solid defence, though, andit wasn’t until late in the first that the Swiss got on the board. That goal came on a power play. Nicole Bullo made a great pass to Sabrina Zollinger who was skating towards the goal and redirected the puck deftly beyond the reach of golaie So Jung Shin at 16:35.

The second period was much the same, but Korea moved the puck with more confidence and skated into the Swiss zone with purpose. Jongah Park had a nice chance from the slot, but her shot found the stomach of Alder.

Then, the Swiss got another late goal, this time off the rush. Evelina Raselli was in position to claim a loose puck, and she wired a hard shot over the out-stretched glove of Shin at 18:52 for a 2-0 lead.