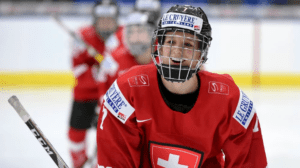 About three months away from the 2020 IIHF Ice Hockey Women’s World Championship various teams used the December international break to test against their competitors.

In Hartford, Connecticut, the Rivalry Series between the United States and Canada began with a 4-1 home-win for Team USA thanks to a 31-save performance from Alex Cavallini and multi-point efforts from Alex Carpenter, Amanda Kessel and Kelly Pannek. Victoria Bach scored Canada’s goal.

“I thought everybody played well and we played at a high compete level tonight,” said Team USA head coach Bob Corkum. “We managed the puck much better than we did in Pittsburgh. It was a great environment here in Hartford and we’re thankful to all the fans who came out and supported us.”

The series continues tonight in Moncton, N.B. and with three games in February in Victoria, B.C., Vancouver, B.C. and Anaheim, Calif

Back in Europe it was time for the traditional tournaments during the international breaks where Switzerland had one of its best performances in years.

Since winning bronze medals at the 2012 IIHF Ice Hockey Women’s World Championship and the 2014 Olympic Winter Games, the Swiss haven’t reached the top-4 anymore in five attempts. And they haven’t beaten Finland during seven-and-a-half years and 12 games.

Not so this month as the Swiss opened the Four Nations tournament in Fussen with a 5-4 shootout win against the Finns, who have been the best European team in the last three seasons.

Susanna Tapani and Noora Tulus each scored a pair of goals for Finland but the Swiss came back from a two-goal deficit with goals from Lara Stalder, Dominique Ruegg, Alina Muller and Rahel Enzler for a 4-3 lead. Eventually the Finns tied the game at four and it went to overtime and shootout where Stalder scored the game-winning goal.

Switzerland continued with another tight win, 5-4 in overtime against host Germany. Again the Swiss came back from a 2-0 deficit. Laura Zimmermann scored two goals in regulation time and Stalder again had two goals including the game-winner at 3:54 in overtime.

The Swiss confirmed the tournament win with a 4-0 blanking of Sweden on the last day, which for the Swedes continued a nightmarish year that started with the first relegation of a Swedish ice hockey national team in any World Championship category. Alina Muller scored two goals for Switzerland in that game.

Stalder was named best forward of the tournament with a tournament-leading four goals and six points while the Swiss also had stellar goaltending. 19-year-old Saskia Maurer helped the Swiss in their upset win against Finland with 36 saves followed by a 31-save shutout against Sweden in her other game.

“The sensational team spirit and professional attitude were the main reasons for the success,” said head coach Colin Muller. “We played indeed well. It was noticeable that compared to the previous tournament we had an experienced team here. We did a step forward but still have potential for improvement.”

Finland also lost its second game, 4-1 to Sweden, but thanks to a 3-2 win against Germany reached four points, which was enough for second place before Germany and Sweden

Further east Russia hosted a Six Nations Tournament at the Olympic park in Sochi. Even though the Russians tested a B squad rather than the official women’s national team, they won the tournament.

The Russians beat Norway (4-2) and Denmark (6-0) in the group stage before celebrating a 3-1 win in the final against the Czech Republic, the other group winner.

The tournament was also an opportunity for the two newly promoted Women’s Worlds teams to test against higher opposition. Hungary with a 2-1 record and third place fared better than Denmark, which eventually got its first win in the game for fifth place against France.