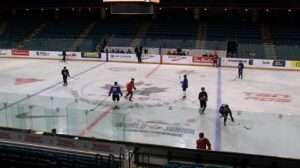 They say death and taxes are the only two certainties in life, but when you live in Canada, there’s a third: hockey. This week in Kamloops the third is on display, with some of the best under-20 hockey players in the world in town. It’s the world junior showcase. The first step in Team Canada’s journey to the 2019 World Junior Tournament in Vancouver and Victoria.

It’s been almost eight months since Alex Formenton last donned the Maple Leaf. He was on the ice in the dying seconds as Team Canada captured the 2018 World Junior Hockey Championship, defeating Sweden by a 2-1 score.

“I just remember getting the opportunity to pick up the puck in the neutral zone,” Formenton said with a big smile. “The whole tournament was memorable, just being with a great group of guys.”

As one of the few returning players from that team, Formenton will be looked at to lead this young team heading into 2018 World Junior Showcase, set to kick off tonight at the Sandman Centre.

“I just try and model my game after the leaders who lead by example,” Formenton said. “I’m not a real vocal guy, but I want to lead by example on the ice and try and help out my teammates as much as I can.”

One of those young players getting his first look at the national U20 program is Vancouver Canucks 2018 2nd round draft pick Jett Woo, who says he’s coming to the event ready to learn.

“For myself, being such a young player and young prospect, the biggest thing for me is to keep my eyes open,” Woo said. “If I think that I’m good now, there’s so much more I can do.”

For Woo, the transition to the National program from his major junior club should be a little easier, as his head coach with Moose Jaw Warriors, Tim Hunter is at the helm of the Team Canada for the showcase and the 2019 World Junior championships.

“He was a pretty gritty player and a hard-working player,” Woo said. “Those are the things I’ve been able to pick up from him: hard work and compete level.”

Hunter played 16 seasons in the NHL, and was known for his grit and toughness on the ice; he knows he’s got to let his team find their own identity in this event.

With only three returning players at to the summer showcase event, he’s embraced the possibility he could have a young team heading into the 2019 World Junior Championships.

“Some of the best players here are 2000 [born players]. Always, an older team is a better team, but there’s a lot of good 2000’s in Canada, and we have quite a few here, especially on defence,” Hunter said. “At the end of the day, we’re going to take our best players. The players that can play the style we want, and whether they’re [born in] ’99 or 2000, it doesn’t matter.”