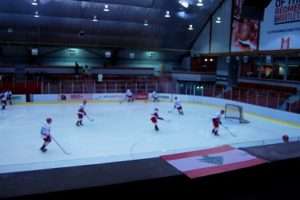 The team was built by Lebanese community members in Montreal

Dozens of players from across North America currently play for Lebanese national hockey team, a grassroots initiative with hopes set on Olympics

At first glance, Saturday night’s hockey game was like any of the thousands of others taking place across Canada.

But as the starting rosters were read out over the arena’s sound system – and fans wove red and white flags, emblazoned with a green cedar tree, enthusiastically in the stands – it was clear that something else was taking place.

The game was a chance to showcase Lebanese hockey talent – and give the close-knit community in Montreal something to cheer for.

Charles El-Mir, president of the Lebanese Ice Hockey Federation, said between 50 and 60 players – all of Lebanese descent, between ages 18 and 38 – currently play on the team.

They hail from across North America, but the majority are based in Canada, “the hub of ice hockey”, El-Mir said.

We say … that we are writing history, to be honest with you
– Charles El-Mir, Lebanese Ice Hockey Federation president

Last month, the Lebanese Ministry of Youth and Sport gave the federation official accredited status in Lebanon, making it the only official body representing Lebanese ice hockey players in the world.

That status also paves the way for the federation to apply to join the Lebanese Olympic Committee and the International Ice Hockey Federation, which would open the door to international matches, including at the Olympics.

The president of the Lebanese Olympic Committee, Jean Hammam, did the ceremonial puck drop at the start of the game in Montreal on 22 December, which saw the Lebanese side win 11-6 against a local team.

Ralph Melki, the team’s coach, moved to Canada from Lebanon at age six. He started to play hockey two years later, after he asked his father – by that time, a fan of the Montreal Canadiens, the city’s National Hockey League team – to sign him up.

“I grew up here and fell in love with the game,” Melki told Middle East Eye ahead of Saturday’s game. 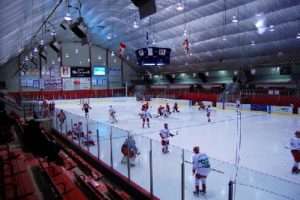 When he moved onto coaching after his playing days ended in his later teenage years, Melki said he noticed the high number of talented players of Lebanese background in Montreal.

Melki said some of the players come from as far away as the US states of Ohio and Michigan, or the cities of Calgary and Edmonton in western Canada, to represent Lebanon.

“They’re all dedicated,” Melki told MEE. “We have talented players on the team.”

For El-Mir, the next major goal is to build an ice rink in Lebanon and begin training more players there. But until then, the base remains in Montreal. “We say … that we are writing history, to be honest with you,” he told Middle East Eye.

This month also marked the first time the Lebanese Ice Hockey Federation helped get a women’s team on the ice.

Ranging in age from 15 to 38, the players came to Montreal from across North America to play an exhibition match of their own on 22 December.

“It’s surreal,” said Sally Tabarah, the women’s team’s manager, who hails from New Jersey. She told Middle East Eye she said she spent four months scanning the rosters of university teams and others, searching for last names that hinted at Lebanese ancestry.

“We want to make it to the Olympics one day. It’s a lofty goal – but why not?” she said.

The women had never played together before, but they bonded almost immediately, Tabarah said, revelling in their shared backgrounds and dreams of representing Lebanon.

“We all have this shared ancestry… All that matters is we’re playing for the cedar,” she told Middle East Eye. “This is history in the making.”