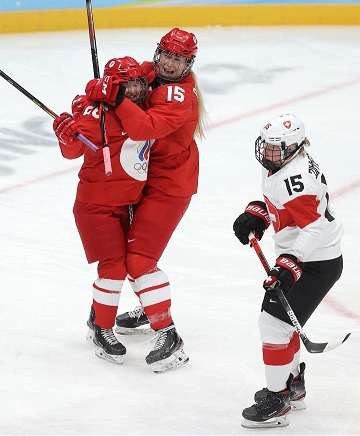 The Russian women’s hockey team defeated the Swiss team 5-2 in a group stage match of the Olympic tournament. The game was held in Beijing at the National Stadium.

The goals for the Russian team were scored by Yekaterina Dobrodeyeva (6th minute), Polina Bolgareva (18th, 38th, 42nd minutes) and Anna Shibanova (31st minute). The scoring players for the Swiss team were Lara Stalder (18th minute) and Alina Muller (27th minute). Earlier, Yevgeny Bobariko, the Russian team’s head coach said that six players from the national team were infected with COVID-19, and Diana Farkhutdinova and Ekaterina Nikolaeva were in the hospital. The Russian women had their training for the first time five days after their arrival.

The Russian and Swiss teams play in Group A against Canada, the United States and Finland. Team ROC hockey will play their next game against the Americans on February 5. Later in the day, the Swiss team will also play against the US.

According to tournament rules, all teams in Group A and the top three teams in Group B, where the teams of Denmark, China, the Czech Republic, Sweden and Japan compete, qualify for the playoffs.

Women’s ice hockey was first introduced at the 1998 Olympic Games in Nagano. This is the sixth time Russian women hockey players have participated in an Olympic tournament. At the 2018 Olympics in Pyeongchang, the team took fourth place, which is their best result at the Games.