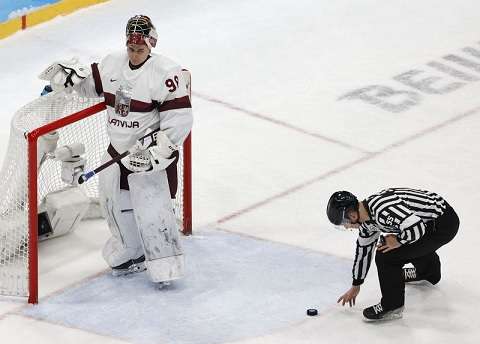 Teenager Juraj Slafkovsky helped Slovakia to their first win of the men’s ice hockey tournament at the Beijing Olympics on Sunday with a 5-2 victory over Latvia.

The 17-year-old, widely expected to be one of the top picks in this year’s National Hockey League (NHL) draft, scored his fourth goal of the tournament, accounting for half of Slovakia’s total through the first three games.

“Before the tournament if someone would tell (me) I would score even one or two goals I would laugh but it is actually happening,” said Slafkovsky, who is now the tournament’s leading scorer.

“My line mates are playing really well and maybe they don’t have the points but those little things on the ice they are doing are great.

“For example today when I scored they were both fore-checking and I just got the puck and I shoot.”

The teams traded goals in a tight first period before forward Peter Cehlarik whipped the puck into the net to put Slovakia ahead in the second and Slafkovsky added to their advantage.

Latvia forward Miks Indrasis tipped the puck in early in the third period to reduce the deficit but Slovakia then scored twice more, including one into an empty net in the final second.