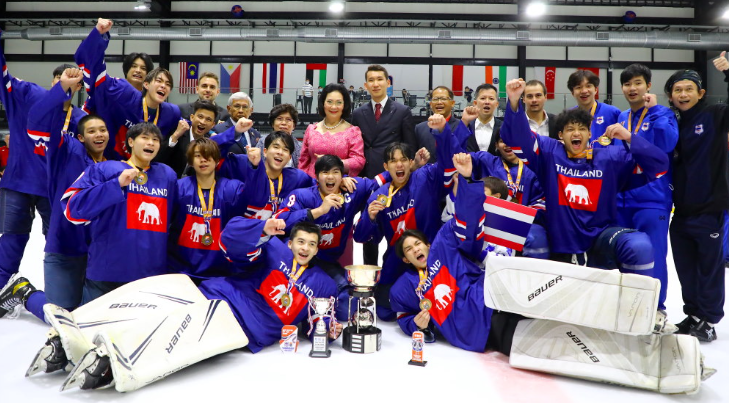 The Thai U20 national team celebrates after winning the tournament on home ice in Bangkok.

A short-benched Thailand team battled to gold in the 2022 IIHF Ice Hockey U20 Asia and Oceania Championship. Despite missing five players in Saturday’s gold-medal game against a Singapore team that upset the seedings, the host nation edged a 4-3 verdict on home ice in Bangkok.

Thai forward Sittinon Promthong, who was named his team’s best player in Saturday’s final, said: “It was an exciting and very competitive game. We all gave our best, and I’m glad we got the gold against a very worthy opponent.”

True to the spirit of a tournament that marked a return to action after the pandemic, he added: “More than just the games was the friendship we built with players from the participating countries.”

Defender Ramin Chan-Urai grabbed Thailand’s winning goal with 5:38 left in regulation time, firing in a shot from an acute angle after Promthong collected the puck on the boards and circled his way to the danger zone, carving a path through the defence. Chan-Urai’s effort got past Singapore’s goalie, Joshua Lee, who had put up some heroic resistance in this game and deservedly led the rankings for netminders after stopping 91.67 per cent of the shots he faced.

However, Lee struggled to stop Thanachai Sakchaicharoenkul. The forward, who is part of the Canstar Rangers club in the Thai championship, grabbed a hat trick and was credited with an assist on the game-winner. His efforts saw the young Elephants battle back from 0-2 early in the game to seal a second U20 tournament win for his country after the 2019 success in the Challenge Cup of Asia. It made a fine belated birthday gift for a young man who celebrated his 18th birthday last Sunday with the competition still in its group stage.

Singapore, too, had plenty to be proud of. This tournament followed a similar format to the eight-team U18 Women’s World Championship of recent years, with the top seeds in Group A and the outsiders in Group B. Singapore was placed in the lower-ranked pool, topped the pile, then defeated Malaysia and the United Arab Emirates in knock-out play to earn its place in the final. In addition to Lee’s impressive goaltending, forward Joshua Chan led the scoring race with 19 (16+3) points from six games and was named tournament MVP.

“Winning the silver medal was an incredible achievement for our team as we are a growing nation,” Chan said. “I hope we will continue to develop as a team, as we are the future players for our men’s national team.

“There were challenges along the way, with injuries which shortened the bench, but we stuck together and believed we could win every game.”

Chan, 18, was on target in the final as well; his power play goal opened a 2-0 lead for Singapore in the sixth minute. Thailand, red-hot favourite after a free-scoring performance up to this point, was rocked. And the host nation’s problems intensified when alternate captain Patpoom Patong was ejected from the game after eight minutes.

Patong’s departure added to a list of absences that already included defenceman Poon Harnchaipibulgul, who had a rating of +25 after his three games before injury. His dismissal meant that head coach Kim Aarola, a Hameenlinna born Thai-Finnish dual national, had only twelve skaters available for the rest of the game – a situation almost as tough as the semi-final against Hong Kong, China where Thailand edged a 7-6 come-from-behind overtime verdict despite icing just 11 skaters.

However, Sakchaicharoenkul rose to the challenge. Two goals in the 17th minute turned the game around then his hat-trick marker gave the Thais the lead for the first time in the 34th minute. Singapore hit back immediately through Shaw Hsiang Lee but the balance of the game had already tilted in Thailand’s favour: after the first-period shot count was 13-12, the home team outshot Singapore 18-5 in the middle frame and 16-6 in the third, limiting Singapore’s scoring chances despite dressing just three recognised defenders.

One of that trio, Punn Phasukkijwatana, was chosen as the best defender in the tournament after collecting 11 (5+6) points from five games and a gaining +24 ranking.

“The award belongs to everyone on the team,” he said. “We played our hearts out and gave it our all together as one big family. I thank all my team-mates, staff and fans for this wonderful experience. It’s been an honour to play hockey for our nation.”

There was more success from Group B in Saturday’s bronze-medal game, where Hong Kong, China beat the United Arab Emirates 6-5. The team from the South China Seas pushed Thailand all the way in the semi-final and produced another battling performance to take third place. The Emirates led 2-0, then 4-1, but the Hong Kongers would not be denied. Five unanswered goals, including two each for Ernest Keung and Ryan Cheuk, turned the game around. Talal Binsammoud’s second of the game gave the UAE hope in the closing stages, but HK held on to take the medal.

Hong Kong, China also had the tournament’s best goalie, with Boyce Wong getting the prize from the directorate. He played in all five of his team’s games, collecting three wins on the way to that bronze medal.

“Having not played hockey for months at a time due to Hong Kong’s Covid-19 restrictions, we weren’t sure what to expect coming into this tournament,” Wong said. “A lot of our players had just returned from studying overseas and we didn’t have much team chemistry. However, we practised hard in the weeks leading up to the tournament and the team meshed together really well after the first few games.” 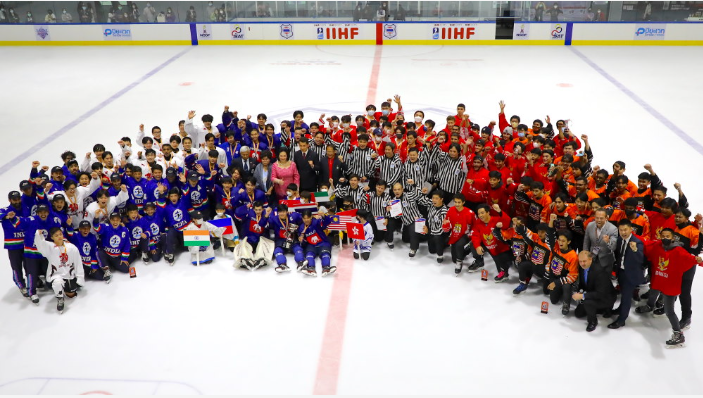 The teams come together for a joint photo after the closing ceremony.

The Emirates, meanwhile, included Nolan Murphy, whose father Ron was a hockey pioneer in the Gulf. Murphy Snr, a long-term expat in Dubai, brought his love of the game when he arrived from Canada. He played a pivotal role in popularizing the sport among local players in the early 2000s. He also dreamed that his son Nolan, born in Dubai in 2006, would represent the UAE’s national team. Sadly, Ron passed away three months before Nolan could make his international debut at this tournament, but his son delivered a perfect tribute on the ice with 12 goals in the competition to finish as the second-highest goal scorer in Bangkok. He was also the directorate’s selection as the best forward in the tournament.

“I think overall we did well for the team we had,” Murphy said. “We had so many tough games. Overall, the tournament was tough. However, I know that myself and the team enjoyed and I’m looking forward for the next one.”

Away from the medal games, fifth place went to Malaysia while the Philippines were left in sixth place after a Covid-19 outbreak in the squad forced the team to withdraw partway through the tournament and forfeit its remaining games. The remaining placement game saw Indonesia defeat India 8-2 to take seventh place among the eight competing nations.

Off the ice, the competition in Bangkok represents a reactivation of hockey among Asia’s emerging nations. For most countries, this was a return to international junior play for the first time since 2019 after the pandemic forced the cancellation of tournaments in 2020 and 2021.

It was also the IIHF tournament debut for Bangkok’s new International Ice Hockey Arena, which opened earlier this year. The modern facility was a hit with the fans. Thailand’s games attracted an average crowd of over 500, demonstrating interest in winter sports even in the tropical summer. The arena also earned praise from the players. Hong Kong, China goalie Wong said: “We were impressed by the facilities at the rink, especially the built-in hockey shop. Some of our players who were missing minor pieces of equipment could get it on-site instead of having to travel or wait for it.”

And Aivaz Omorkanov, IIHF Vice-President for Asia and Oceania, was encouraged by the action in a hugely competitive tournament.

“This was an unbelievable tournament and I would like to thank everyone involved to make that tournament happen, especially the Organizing Committee. Definitely we saw a lot of talent and potential,” he said. “We as the IIHF, together with are Member National Associations, now need to unfold this potential and make it visible across the whole region.

“I’m very happy for all the players who made it to their national teams and represented their home countries. At last we can say – Asia and Oceania is back on the ice after years of waiting.”

This week’s tournament promises to be just beginning for hockey in the region. “We will work with every Asia and Oceania member on structured and systematic development progress, so that everyone can make the next important step,” Omorkanov added.