The super Vauclair bros, it’s the end of an era! 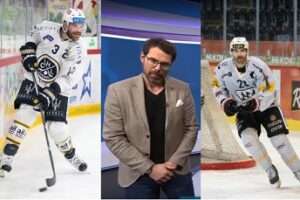 Together, they collected over 2’000 National League appearances. We’re talking about the three “Super Vauclair Bros”: in alphabetical order Geoffrey, Julien and Tristan. Three Jurassiens that all played youth hockey for HC Ajoie.

When it comes to young talents it is often said that one in a thousand makes it. In this case, as many as three brothers made it, to a greater or lesser extent, in the top tier of Swiss hockey. That’s a fantastic story. One of them, Julien, was even able to collect an NHL appearances with the Ottawa Senators and, frankly speaking, if he had been born fifteen or so years later, we are certain that there would have been many more appearances in the world’s most prestigious league.

At the end of the 2019-20 season, in a very ungenerous way because of the emergency-situation, the last two brothers that were still playing in the National League – Julien and Tristan – hung up their skates.

What can we say? All the three of them deserve a big round of applause, it’s as simple as that.

They never played at the same time in the same National League team and perhaps this is the only “regret” for these three “Super Bros”. In any case, they have tied their names to three teams in particular. Ajoie, their youth teams, Lugano and Fribourg Gottéron.

Geoffrey, who is today 43 years old, was the first one who hung up his skates at the end of the 2013-14 season. He made his National League debut with Lugano during the 1997-98 season and then played also for Fribourg Gottéron, Olten (1 appearance), Franches-Montagnes and Ajoie where he spent the last 4 years of his career. He was a very talented forward that did good things and that maybe, with all due respect, considering the potential he could also do more. He won the title with Lugano in 1999 when he even scored a goal during the decisive game played at the Valascia against Ambrì-Piotta.

Julien became a real legend in Lugano and his number 3 will stay forever under the roof of the Resega (now Cornèr Arena). He was one of the best Swiss defensemen of this century, he always wore proudly the jersey of the Bianconeri and during the best years he even tallied an impressive number of points. Out of the three brothers, Julien is the one who earned the most prestigious results. He won two times the Swiss title with Lugano, over the years he won several individual prizes, he took part in an AHL All Star Game and even won the silver medal with Switzerland at the 2013 Worlds.

To finish, Tristan is perhaps the one of the three brothers who, with all due respect, had less “pure talent” but that everything he conquered in his career was earned through sweat and hard work. He never won any title but was always appreciated by his fans because of his will to give it the 110% during each single shift. Tristan was the perfect example of the essential player for each team. That kind of a player that perhaps never gifts the fans with spectacular individual plays… but that always gifts the fans with his incredible determination.

Geoffrey, Julien and Tristan were three different brothers when it comes to player type. All of three, however, certainly left their mark in Switzerland this century. One in a thousand makes it… in the case of the Vauclair family, percentages are to be reviewed.

It’s the end of an era. Thanks for all you gave to Swiss hockey and for all you will give again!