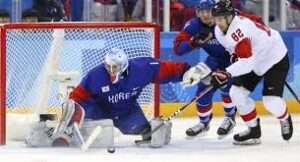 Switzerland was unfazed by a roaring pro-Korea crowd, smoothly emerging as 8-0 winners on Saturday at Gangneung Hockey Centre. The effort matched the Swiss women’s team, who won by the same score against the Koreans.

Jonas Hiller, rarely tested, made 25 saves for the shutout. Pius Suter stood out with three goals.

“We didn’t make too many mistakes and definitely were able to take advantage of our skill set and play most of the time in their zone,” said Hiller.

For a short time, it was possible to see how it could have been more positive for Korea. Not necessarily for them to win, but to compete again.

Starting goaltender Matt Dalton was Korea’s best player in their first game, a 2-1 loss to the Czechs, and early in the second Korean outing, with several difficult saves, he threatened to again stand and defy expectation.

“I felt like the first period for sure I kept us in it and made some good saves,” said Dalton, “But these guys are good they just keep coming.”

The Swiss would eventually break through and score, Denis Hollenstein whacked in a rebound at 10:23 of the first period, a chance created by a speedy wraparound by Gaetan Haas.

The Swiss pressure then intensified, but only briefly. Tristan Scherwey took a tripping penalty at 14:19 which interrupted his team’s flow but the home country would not score.

Late in the first period a spree of heavy hits by Korean defenceman Bryan Young were appreciated by the home crowd and noted by the referees.

Young would take an interference penalty with 42 seconds left in the opening frame, but nothing would come of that, either.

Shots on goal at the end of the first 20 minutes were 15-7 in favour of Switzerland, and they held the 1-0 lead.

The Swiss took a 2-0 lead following a clear but then confused set of circumstances at 7:36 of the second period.

Dalton bobbled a Felicien du Bois shot and the puck rolled on its edge across the goal line.

The Korean netminder desperately reached back with his blocker to obscure the puck, and the goal was waved off initially. But a video review overturned the call on the ice and doubled the Swiss lead.

Later in the second period, Pius Suter pushed the lead to 3-0 with a shifty play behind the net.

The Zurich Lion embarked on a wraparound but then curled back and stuffed the puck behind Dalton at 15:55.

A triplet of early third period Swiss goals would pull the curtains tightly shut, with Thomas Rufenacht and Suter chasing Dalton to his team’s bench. The Korean starter allowed five goals on 27 shots.

“When it’s 8-0, you can’t complain. It’s good for our confidence. Last game wasn’t that great, but tonight was,” said Suter, reflecting on a 5-1 opening loss to Canada.

“Now we have to keep going.”

On Sunday, the Swiss meet the Czechs and the Koreans will collide with Canada.