There is no ice in Azerbaijan,but there is a hockey federation: Laryukov on the chances of getting into the KHL 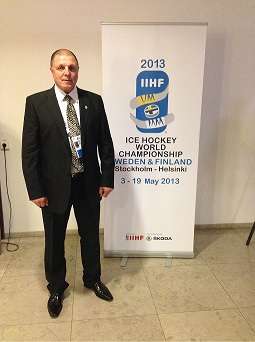 Acting President of the Azerbaijan Ice Hockey Federation Valery Laryukov in a interview with Sputnik Azerbaijan shared his opinion on the possible creation of a hockey club in Azerbaijan.

Recently, the issue of creating a professional ice hockey club in Azerbaijan, which can represent the country in the Kontinental Hockey League (KHL), has repeatedly been raised. The first to speak about this was the Minister of Youth and Sports of Azerbaijan, Azad Rahimov.

The legend of world hockey, two-time Olympic champion, UN Goodwill Ambassador to the Arctic and Antarctica Vyacheslav Fetisov visited Baku, he discussed the development of ice hockey in Azerbaijan with Rahimov., and the other day the famous Russian hockey player of the NHL club “Washington Capitals” Alexander Ovechkin said at a press conference in Moscow that he intends to help Azerbaijan develop this sport. He also noted that he was invited to visit Azerbaijan next year.

Few people know, but Azerbaijan has the Ice Hockey Federation, which has been a member of the International Federation since May 6, 1992. The federation has a secretary general Valery Laryukov, who acts as president of the organization. According to the data on the website of the IIHF the office of the Azerbaijan Federation is located in Moscow at Leninsky Prospekt, 116-1-150. At the same time, one of the numbers of the city of Baku is indicated in the contact telephone number.

In an interview with Sputnik Azerbaijan, Valery Laryukov talked about how the Azerbaijan Ice Hockey Federation was created, his attitude to the creation of a professional Azerbaijani hockey club, as well as about the Azerbaijani national team, which played in the amateur league of Moscow.

How was the Azerbaijan Hockey Federation created?

In 1991, Anatoly Vladimirovich Tarasov, at the request of the Azerbaijani sports committee, asked me to go to Baku to open a hockey school there and develop this sport. About two hundred local children attended the school that opened then. After the collapse of the USSR from Moscow, the head of the Hockey Department of the Sports Committee Yuri Korolev called me and suggested the Azerbaijan Hockey Federation, then we created it and join the International Hockey Federation (IIHF).

I prepared the documents, and in 1992 we took part in the IIHF congress  where Azerbaijan, like the other former Soviet Republics, were accepted into the IIHF. While we participated in the congress, power changed in Azerbaijan – instead of Ayaz Mutalibov, Abulfaz Elchibey came to leadership in the country. Upon returning to Baku, a new Minister of Sports called me, and thanked me for the work I done and said that hockey will not be develop in Azerbaijan, the attention will be paid to national sports.

As a result, I returned to Moscow where I became the general director of the Russian Hockey Federation. However since 1992 the Azerbaijan Ice Hockey Federation has been a full member of the International Federation. Throughout this time I annually pay membership fees in the amount of approximately one thousand euros In order to maintain Azerbaijan’s membership in the IIHF.

Have you tried again to appeal to the sports leadership of Azerbaijan?

I did it several times appealed to the Ministry of Youth and Sports and the National Olympic Committee.
In response I was informed that in connection with the European Games, Formula 1 races and other major competitions, there are no funds in Azerbaijan to development ice hockey.

Despite this, we gathered children from Russian sports schools and took part in the amateur league of Moscow as the Azerbaijani team. We played at an average level  and in order to attract strong players we acquire equipment, and rented ice.  “You need a lot of money to play this sport”.

By the way, it is known that two Azerbaijani hockey players played in this team…

Yes, two Azerbaijanis played on the team and if we have any funding, then they are ready to play.
One of them is Ilgiz Salmanov, and the other is Orkhan Kyazimov. I note that the participation of the Azerbaijani team for next season of the Moscow Amateur League is in question, because this requires funding.

For example, for each match in this league, we need to pay 18,000 rubles for the rental of the rink and the the Referees. Last season we played 26 matches and we spent 468 thousand rubles in total. Each time the players collected this money themselves, taking off one thousand rubles out of there pocket. We are in a deadlock now, as we still do not know whether we can play in the Moscow league.

What motivated you to pay annual membership fees for the national ice hockey federation of Azerbaijan, which actually does not function?

You know, I consider this my brainchild. Initially, I fought for Azerbaijan to become a member of the International Ice Hockey Federation, and this was not so simple. Unlike countries such as Ukraine, Belarus, where the hockey industry was already developed then, it was only emerging in Azerbaijan. We had to convince our foreign colleagues that an ice rink was built in Baku, there are prospects for the development of hockey. 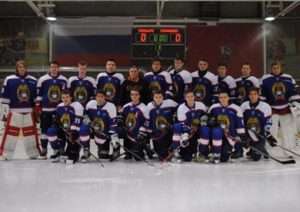 Azerbaijan Team in the Moscow League

Recently Azerbaijan has begun actively discussing the creation of a professional Ice hockey club. This issue was discussed with Vyacheslav Fetisov in Baku and Alexander Ovechkin recently spoke about this at a press conference in Moscow …

As the general secretary of the Azerbaijan Ice Hockey Federation I note that the KHL rules are clearly spelled out – a club that plans to participate in the league should have an ice arena for 12-15 thousand spectators, which Azerbaijan does not have. Back in 1991, an arena was built in Baku on the same premises as the CSKA Arena in Moscow.

Nevertheless, I am all for the establishment of a ice hockey club in Azerbaijan, and if people are ready to cooperate with the federation, then I can provide any help.

By the way according to the regulations of the International Hockey Federation, a club wishing to play in the KHL must obtain permission from the national federation of the country that it will represent in the league. It is the local hockey federation that signs the agreement with the KHL on the club’s participation in this league. There is an agreement between the KHL and IIHF according to which the club in order to participate in the league must obtain a license from its national federation.

In your opinion, is it worth developing Ice hockey in Azerbaijan?

There are two main ways: either a powerful club are created, at which children and youth teams can play or open several hockey schools around the country in which young hockey players  develop.
In both cases, and especially in the second, it is necessary to build skating rinks on which several Olympic sports can be developed – hockey, figure skating, short track and so on. If there is a decision by the country’s leadership to popularize winter sports, then both approaches can become the basis for development.

Which way is suitable for Azerbaijan?

Most likely, this is the first option in which a club can be created to participate in the KHL. Under them, a farm club can operate that will play in the Higher Hockey League. Youth teams can also be created, and subsequently ice rinks in the regions are built. They are now being created quite quickly, in about six months. The question of the main ice arena is a priority.

By the way, recently in Uzbekistan actively took up ice hockey. They built an ice rink, created a hockey team that will play in the Higher Hockey League. But if such people as Vyacheslav Fetisov and Alexander Ovechkin are involved in the project in Azerbaijan, then this is really serious.

I add that the creation of a hockey club at the KHL level is quite an expensive exercise. The minimum annual budget of such a club, which can attract hockey players of a not the highest class, is $15 million,
and the team that claims to have the best players has an annual budget of $60 million .