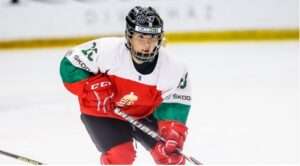 Since making her debut at the at the U18 Women’s Championships in 2014, Jelena Grkovic has played an integral part in Hungary´s spectacular rise to top of the women’s game

Growing up as the lone female player in an entire country is a daunting challenge in a team sport. But Jelena Grkovic has proved her critics wrong on her way to the pinnacle of the women’s game.

If things would have gone as planned, Hungary’s women’s national team would just have completed their baptism of fire at the 2020 IIHF Ice Hockey Women’s World Championship in Canada this month. The Central European debutants were scheduled to take on the Czech Republic, Denmark, Japan and Germany in Group B contested in Truro, Novia Scotia.

The ongoing spread of COVID-19 pushed ahead Hungary’s entry to the big stage until next year. As the news of the postponement broke through on 7 March, Grkovic temporarily downed tools in her recovery work from a knee injury sustained while skating for her club team, KMH Budapest.

“I am sad about not going to Canada, but I think everything happens for a reason. We had a lot of injuries this year, but now instead we have to fully prepare mentally, make even further progress as a team and then be completely ready when the moment arrives,” said Grkovic.

The success came in the wake of last April’s top place finish at the 2019 IIHF Ice Hockey Women’s World Championship Division I Group A on home ice in Budapest. Winning gold in front of 1,944 jubilant supporters, Pat Cortina’s team deservedly booked a place to compete against the top-ten nations of the world.

“It’s an amazing accomplishment and something you only dream of. I’m born in a country where women’s hockey didn’t even exist when I started so now to be playing in the top division feels unreal,” said Grkovic, who made her debut for Hungary’s senior national team as an 18-year-old at the 2016 IIHF Ice Hockey Women’s World Championships Division I Group B in Asiago, Italy.

300 kilometers further south from her current home in Budapest, Grkovic spent her formative years in Novi Sad in neighbouring Serbia. Monica Seles had started her journey towards becoming a future world number one in tennis in the same city. For Grkovic, who also dabbled briefly with tennis, it was hockey that won her over at the age of six.

“We were five girls who started at the same time, but shortly after they had all stopped. Being the only girl continuing to play for years, one of the coaches once told my mum that I was only taking a pair of skates from another boy,” said Grkovic, who had no plans to throw in the towel.

“Hockey fits my personality 100 per cent. It’s a challenging, fast and aggressive sport and a great way to handle my huge energy. But I didn’t have a future in Serbia being the only female hockey player. So we as a family decided that I should move and Hungary was a good opportunity for me,” she said.

Hungary’s capital Budapest had back then become a popular destination for Serbian hockey youngsters on the boys’ side. Aged 14, Grkovic arrived north of the border as the first female hockey player enrolling in the Serbian school in Budapest. Out on the ice, the conditions in her new surroundings were in stark contrast to what had been on offer in Serbia.

“The investments in Hungary are far bigger in ice hockey, or actually in any other sport if I am honest,” she said. “At first I continued to play on boys’ teams until the age of 16. After that only with girls.”

Her younger brother Dusan soon followed suit to Budapest. But when he was able to skate for Serbia’s national team program, Jelena made her debut for the Hungarian U18 national team in 2014.

She has since been ever-present in the Hungarian national team set-up. Now in her ninth year in Hungary, Grkovic combines university studies with hockey and has become the live wire inside the national team locker room.

“For me, it was never hard to go away from home and I have always been curious about the world. When moving to a new country you need to accept the culture and learn the language. I now have lived in Hungary for years and thanks to my social skills I am totally fluent in Hungarian. I am the one who speaks up for the team, constantly makes jokes and never shuts up,” she said.

With Grkovic reaping rewards in Hungarian hockey, across its southern border, the women’s program in Serbia is starting to make progress. Participating numbers show a growing trend with currently 75 female hockey players around the country and Serbia participates in international initiatives such as the World Girls’ Ice Hockey Weekend.

“I sometimes go to see my family, but my hockey schedule keeps me pretty busy. Even though I am not effectively there and physically doing something, I hope I do give them motivation. I would like to help if I can and there are more girls playing hockey now in Serbia. I was also happy to see that there recently was a girls’ day in the rink where I made my first steps,” said Grkovic.

Currently working hard to recover to full fitness for next season, Grkovic believes Hungary only needs a bit of fine-tuning to be able to spring a surprise one year on when the team will have its top-level debut at the 2021 IIHF Ice Hockey Women’s World Championship that could – formal approval by the IIHF Congress pending – take place in Halifax and Truro, the cities that have been scheduled for this year.

“Ahead of this season half of our players from KMH Budapest joined a new women’s team MAC Budapest so we need to work pretty hard on our team building. As a national team, we are not that big physically, but we are good, fast skaters and playing fair while being aggressive. But I’m a very optimistic kind of person and I think it will be a great challenge and of course. I think we could stay up,” she said.