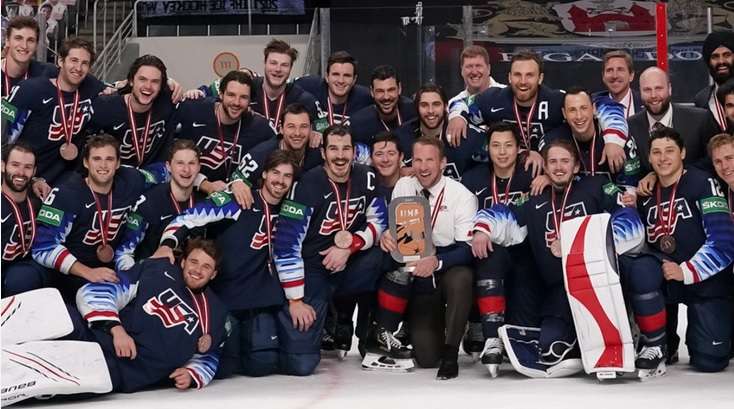 Team USA celebrates with the medals after a 6-1 bronze medal victory over Germany at the 2021 IIHF Ice Hockey World Championship in Riga, Latvia

Conor Garland led the way with a goal and two assists as the U.S. defeated Germany 6-1 in the bronze medal game of the 2021 IIHF Ice Hockey World Championship on Sunday.

“It just proves how much character guys they really are,” said U.S. head coach Jack Capuano. “It was disappointing the other night to lose [to Canada], but we played a great team again here today. You saw the penalty-killing, the special teams today, that’s just who we are. Whatever it takes, the sacrifices, the brotherhood we talked about, coming together in this tournament and growing together as a group.”

“It was tough, but it was worth it,” said 36-year-old captain Brian Boyle, who represented his country for the first time at these Worlds. “Being a part of this team is going to be one of my fondest memories of playing. I’m really thankful that they let me come on and I’m really proud to be part of that group.”

German coach Toni Soderholm mixed things up in net by starting Felix Bruckmann over Matthias Niederberger, who carried the load at this tournament. Bruckmann’s two previous Riga appearances were in the 2-0 group-stage loss to the Americans and the opening 9-4 romp over Italy. Unfortunately, his teammates weren’t able to generate enough goals on Sunday.

“We’re all incredibly sad,” said German captain Moritz Muller. “In the dressing room, no eye stayed dry. We would have deserved it. We felt that our team was very special. The fans watching on TV felt how unique this group is. We’re thankful we could have experienced this and sad we have not been rewarded.”

For the U.S., starter Cal Petersen returned the day after taking the loss versus Canada in the semi-final. Shots favoured Germany 34-30.

Petersen hailed the leadership of Justin Abdelkader, who was limited to six games as captain due to a lower-body injury, and Boyle, who wore the “C” the rest of the way. Neither veteran played in the NHL this season, although Abdelkader enjoyed a championship run with Switzerland’s Zug, and helped out Capuano on the bench after being sidelined.

“These are two guys that have already proven a lot in their own careers,” Petersen said. “And they made the choice to come over here and leave their families and sit in a bubble with 20 other young kids that maybe didn’t fully realize or have the kind of experience that they did. For them to stand shoulder to shoulder with us and put everything into this tournament, showing us what it means to be a leader and a winner, I think, is awesome.”

It was a rough conclusion for the Germans. Although they struggled to score goals as these Worlds progressed, they showcased their character and skill in key wins over Canada (3-1) and Latvia (2-1). They shocked Switzerland with a 3-2 quarter-final shootout win, and delivered a gritty effort in two losses to defending champion Finland (both 2-1), including the semi-finals.

“It’s been an experience for my lifetime,” said Soderholm. “Ever since we came together for camp and landed here, we felt that something is possible. We had good character here and it was an honour to work with them.”

Under Soderholm, the Germans have improved from sixth place in 2019 to fourth place this year.

Germany’s last IIHF World Championship medal was silver, back in 1953. The Germans stunned the hockey world at the 2018 Olympics in Korea by capturing the silver medal with a 4-3 overtime loss to the Olympic Athletes from Russia.