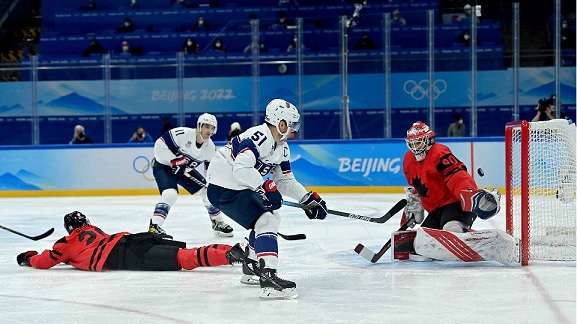 The Canadian men’s hockey team scored 84 seconds into Friday night’s showdown with the United States for a 1-0 advantage.

But they wouldn’t lead for much longer.

The North American rivals hadn’t met at an Olympics since Canada defeated the United States in the semifinals of the 2014 Sochi Games.

In the opening minutes of Friday’s game, Mat Robinson beat Team USA goaltender Strauss Mann with a shot from along the sideboards. However, that wouldn’t be a sign of things to come.

The Americans answered right back just over a minute later with the first of three unanswered goals, as captain Andy Miele scored a backhanded equalizer.

The United States grabbed the lead for good inside the final 20 seconds of the first, with Ben Meyers lighting the lamp off of a nice feed from Sean Farrell.

Team USA found the back of the net again on its subsequent shot attempt, this time capitalizing on a mistake by the Canadians.

Canada goalie Edward Pasquale tried to play the puck behind his own net but lost it on a forecheck from Nathan Smith. Nick Shore picked up the loose puck behind Canada’s net and fed Brendan Brisson for an early second-period goal.

The U.S. had an opportunity to take a commanding lead when it went on a power play late in second, but it was Canada who would take back some momentum on Team USA’s man-advantage. Corban Knight deposited a shorthanded goal on an odd-man rush to draw the Canadians back within one.

Team USA didn’t compound the mistake though, keeping Canada at bay before netting an insurance goal. Early in the third period, Kenny Agostino powered a long-range shot past Pasquale to stretch the Americans’ lead back to two.

The United States closed out the win in impressive fashion, killing off two Canada power plays, which included some 5-on-3 time, in the final six-plus minutes. Mann made seven of his 35 saves on the consecutive power plays.

With the victory, the U.S. improved to 2-0 in the preliminary round. Meanwhile, Canada dropped to 1-1.

Team USA will conclude preliminary round play against Germany on Sunday at 8:10 a.m. ET.