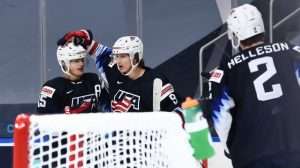 The U.S.’s Trevor Zegras (#9) celebrates with Alex Turcotte (#15) after scoring a first-period goal in a 26 December rout of Austria

America is back. Team USA exploded for six second-period goals to pound newly promoted Austria 11-0 on Saturday night at the 2021 World Juniors in Edmonton.

It was a big first win for the Americans, who opened with a 5-3 loss to Russia, the 2020 silver medalists, on Christmas Day. Matthew Boldy had a hat trick, Trevor Zegras added two goals and two assists, Brendan Brisson scored twice, and Alex Turcotte put up three assists.

“I think my confidence has gotten a lot better,” said Boldy, a Boston College star who didn’t make the 2020 World Junior team. “Along with that, obviously, comes my ability to make plays.”

“I was very happy with the response,” Leaman said. “We left something on the table last night [against Russia] and they weren’t happy about it all day.”

The Americans held Austrian sniper Marco Rossi in check. Rossi, the ninth overall pick of the Minnesota Wild in the 2020 NHL Draft, led the OHL last season with 120 points for the Ottawa 67s.

U.S. goalie Dustin Wolf, who relieved starter Spencer Knight after Russia took a 4-1 lead, got his first shutout. Austria’s Sebastian Wraneschitz had a baptism of fire in his World Junior debut with 58 stops. Suffering from cramps, the 18-year-old Vienna Capitals goalie was relieved by backup Jakob Brandner with 10:48 remaining.

Austrian coach Roger Bader, who also coached the senior team at the 2018 and 2019 Worlds, iced a youth-laden squad, including 16-year-old forward Marco Kasper (Rogle Angleholm). His team tried hard early on to disrupt the U.S. with active sticks and physical play along the boards.

“We battled pretty good in the first period,” said Austria’s Leon Wallner. “They are humans. We saw that if they get pressure, they make mistakes.”

Midway through the first period, Wraneschitz made a fine save on Zegras, who stickhandled in from the slot and launched a backhander. But the scoreless tie wouldn’t last.

At 15:31, Wraneschitz got fooled on the opening goal off the rush. Alex Turcotte’s centering pass bounced off Helleson’s skate, and the puck bobbled over the kneeling netminder’s stick and trickled over the goal line. The U.S. then hit multiple goal posts.

In the second period, Zegras made it 2-0 at 4:35 with a wrist shot from the over Wraneschitz’s blocker.

Now the floodgates opened. John Farinacci scored his second goal of the tournament 28 seconds later for a 3-0 lead. Brisson put the U.S. up 4-0 at 8:05 with a power-play one-timer. At 11:59, Zegras threaded the needle with a high short-side goal.

A close-range Matthew Beniers backhanded pass on the rush gave Boldy the 6-0 marker at 14:15. And with 1:12 left in the period, Boldy poked in a rebound with the man advantage.

In the third period, Brett Berard executed a Pavel Bure-like dash down right wing and cut to the net to make it 8-0 at 2:25. Just 42 seconds later, Brisson scored his second of the night. Boldy completed his hat trick at 5:52. And Sam Colangelo scored on the U.S.’s first shot at 9:45 after Brandner took over Austria’s cage.

“I thought we stayed with it pretty much to the end of the game, which was good,” Leaman said.

Austria’s Philipp Wimmer was ejected for a hit to the head of Patrick Moynihan with just over a minute remaining.

U.S. defenceman Tyler Kleven, an NTDP product and University of North Dakota freshman, slotted into the lineup in lieu of Jackson LaCombe, who went -2 versus Russia.

Austria’s next game is against Sweden on Monday, while the U.S. takes on the Czechs on Tuesday.