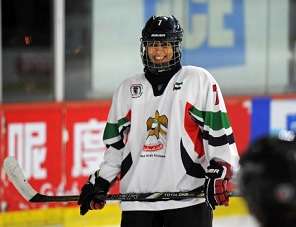 By Yasmin Helal – My Salaam

Even before the formation of ice hockey sports clubs in the UAE in the 1990’s, Fatima Al Ali had fostered a passion for the sport. She had watched the game in movies as a child, and when she turned 18 in 2008, she seized an opportunity to work with the UAE’s national men’s team as a photographer.

When the women’s team was formed in 2010, she was among the first to join, and today she is one of the few hijab-wearing hockey players in the world. “I’ve been playing hockey since May 2011, working hard to be the best I can be in the game, and after struggling I finally got into the second league,” Fatima told My Salaam.

She quickly became known for her talent in the game, winning first place in Hong Kong in 2013, Bangkok in 2014, and Kuala Lampur in 2015. She was also named Best Player of the UAE–Singapore game in 2017.

Fatima’s passion for ice hockey may seem unusual for an Emirati, but she is hardly alone. The sport’s growth in the Emirates owes much to a prominent fan, HH Sheikh Falah bin Zayed Al Nahyan, a member of the Abu Dhabi ruling family. Sheikh Falah was among the first to play and endorse the game in the country, leading Russian ice hockey icon Maxim Petrov to describe him as “the father of ice hockey in the United Arab Emirates.”

Sheikh Falah’s passion has paid off. Defying all odds, the Emirate’s ice hockey men’s team has won eight medals so far, including three gold and five silver. A game played in Toronto in November 2005 between Emiratis and some of the sport’s greatest heroes welcomed the UAE into the global community of ice hockey.

“Days after the game, Sheikh Falah’s jersey was inducted into the Hockey Hall of Fame, marking the first time a UAE national team jersey had been accepted by the sport’s most prestigious institution,” Petrov said.

For her part, Fatima still works as a photographer, practicing only during her spare time. A lack of financial support makes a full-time career in ice hockey impractical. “We play hockey as a hobby, not even part-time, and we do not have full support. We only get ice time twice a week,” she said.

To compensate for this, she officiates and coaches to get more involved in the game. “I’ve been coaching kids for three years now to teach them the game and pass on my passion.”

Despite the lack of support, Fatima is making waves. Earlier this year, she made an impression on Peter Bondra, an ambassador of the Washington Capitals, the Washington-based professional ice hockey team, during his trip to the UAE. He recorded her stick-handling techniques in a video and posted it on Twitter, and the tweet went viral, with more than 460,000 views and thousands of shares and likes.

Bondra subsequently invited her to Washington for the Hockey Is for Everyone campaign (which aims to drive positive social change and foster more inclusive communities) as the Washington Capitals’ guest of honor.

“Fatima Al Ali is an example of what Emirati women who play hockey have achieved,” the Washington Capitals’ player Alexander Volchkov said. “The UAE women’s national ice hockey team, which has competed in both domestic and international tournaments, is a great example of how women have taken advantage of the chance to play hockey.”

When Fatima thinks of the future, all her dreams involve ice hockey and sports. She hopes to win the Asia Cup and participate in the Asian Winter Games as a player, but she also wants to reach higher levels as an officiate at the World Championship and eventually move on to the Olympics.

And once she retires, she would like to coach her own team. “I hope I can inspire others to follow their dreams and work hard to make them come true, because nothing is impossible. Hopefully, my story will encourage more women to explore hockey in the region.”