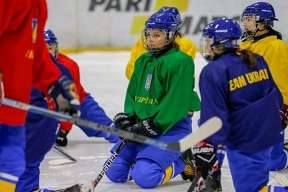 For the first time ever, the Ukrainian Women’s National Team will compete in an IIHF Women’s World Championship in February 2020

The Ukrainian Women’s National Hockey Team will be playing in an actual IIHF World Championship for the first time ever. Nearly a year ago, the Ukrainians competed in the 2019 Division II B qualification tournament. Going up against South Africa, Belgium, Hong Kong and Bulgaria, the Ukrainians allowed a mere five goals through four games and went undefeated.

This was a victory that we had to make,” said Ukrainian defender Maryna Kobchuk. “We cried, we rejoiced, and we congratulated each other.”

Completing that successful qualification run, the team will now head to Akureyri, Iceland at the end of February. From Feb. 23 through 29, they will partake in the
2020 IIHF Women’s World Championship Division II B.
This is something that Kobchuk – who will turn 21 years old on Jan. 15 – has been working to achieve since the age of 15 when she first began organized hockey.

“It will be difficult – but our team is ready,” Kobchuk said. “Listening to our coaches’ assignments is critical. This group of teams that we will be going up against includes Turkey, Iceland, Croatia, Australia and New Zealand.”

Kobchuk, along with many of her national teammates, plays for HK Ukrainochka in her homeland. The Ukrainian Women’s Hockey League is quite small and consists of just three teams – Ukrainochka, Pantery Kharkov, and Avtomobilist Kiev. The league itself came to fruition in 2016, and has been the primary training bed for women’s hockey in this country.

“This past season our team HK Ukrainochka became champions of Ukraine,” Kobchuk smiled. “All of us were very happy to see how far we have come along as a team and as a league.”

Going 6-12-18 in scoring through 12 games this past 2018-19 season, Kobchuk was the second highest scoring defender in the league. She would also be named the league’s Best Defender. Across 36 career games for Ukrainochka, Kobchuk has scored 13 goals, 26 assists and 39 points.

Possessing a left-handed shot, she also has ideal size for a rearguard and skates well in and out of the zone. Kobchuk stands 5-foot-8 and is over 150 pounds. Her solid build is an advantage she is quite comfortable using, and she prefers playing an aggressive, physical game. 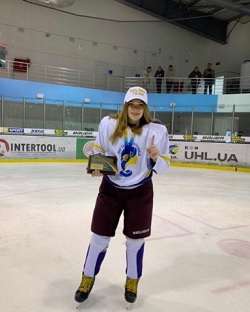 Looking Ahead to Iceland

The Ukrainians will bring more firepower to Akureyri than what people may realize. They possess a good amount of depth as well.

The oldest players on the country’s national team are 47-year-old twin sisters Inna Kozub and Elena Vansovich. The 5-foot-4 winger Kozub totaled two points (1G, 1A) in Ukraine’s 5-2 victory over Hong Kong on Jan. 17, 2019. Both women’s experience and motherly presence for this otherwise young squad adds a great deal of reassurance.

32-year-old Olena Tkachuk is one of the team’s top scorers. She went 3-3-6 through the four qualification games. Tkachuk is also a former member of the HK Pantera Minsk of Europe’s prestigious Elite Women’s Hockey League (EWHL). One of her teammates in Minsk was current Metropolitan Riveters forward Kelly Nash.

The Ukrainians’ main sniper is 18-year-old Darya Tsymirenko. She was the Ukrainian Women’s League’s top scorer in 2018-19 with a whopping 39 goals, 17 assists and 56 points in a mere 12 games.

“The women’s team – and this is a fact – has seen each player grow in her own way,” said Kobchuk. “At this time, we have added new, young players – just 16 or 17 years old – who did not play with us last year. Each of these girls has trained with men’s teams.”

The team’s top goaltender is 5-foot-9, 150-pound Viktoria Tkachenko. Through the four qualification games, Tkachenko came out of Cape Town, South Africa possessing the best goals against (1.29) and save percentage (.917). Not surprisingly, she was also named Best Goaltender for the tournament as well.

How Will the Ukrainians Fare?

How the Ukrainians will perform in Iceland remains to be seen. While they are a talented bunch, they are going up against well-established countries, namely the Icelanders and the Australians.

Kobchuk and her teammates know that they are in for a challenge.