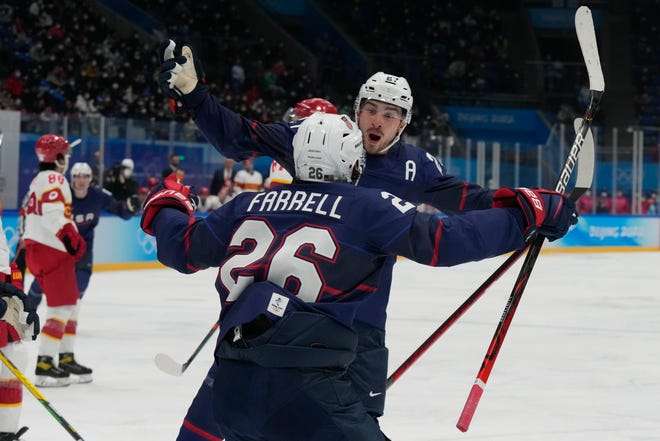 The NHL decision to pull out of the 2022 Winter Olympics allowed a crop of prospects and some overseas vets to represent their countries. For the United States, the dropoff in talent didn’t matter much in the opening game against China.

The Americans rolled to a 8-0 victory — seven of those goals coming in the last two periods — on Thursday at National Indoor Stadium to start group play.

Then again, it’s worth considering the opponent. China — only fielding a team at these Winter Olympics because it is the host nation — is ranked 32nd in the International Ice Hockey Federation rankings. There are 12 teams in the tournament.

Sean Farrell, a 20-year-old sophomore at Harvard and Montreal Canadiens prospect, led the way with three points (three goals, two assists ). Drew Commesso, who at 19 became the youngest U.S. goaltender at an Olympics, saved all 17 shots China put on net.

University of Michigan forward Brendan Brisson (Vegas Golden Knights) buried the United States’ first goal on their second power play of the first period to give the U.S. a 1-0 lead. He fed Matt Knies (Toronto Maple Leafs) down low, and Knies drove at China goaltender Jeremy Smith. Knies managed to tip the rebound back to Brisson, who hammered it past Smith on a one-timer.

The Americans used a three-goal second period to pull away.

It started with Farrell’s behind-the-back pass – from behind the net – to Noah Cates for the team’s second goal. With the teams taking penalties four seconds apart, Brian O’Neil – the lone member of the current Olympic squad from the roster four years ago – made it 3-0 after Andy Miele stayed tough on the puck in front of the net and slid a no-look pass across the front of the crease.

With 1:53 to go in the period, Farrell received a pass on a 3-on-2 advantage and kept it. That proved wise. His quick release found the top shelf for his second goal.

Farrell added another goal 66 seconds into the third. Off a faceoff, he fed Ben Meyers, who scored on a top-shelf backhand past Smith’s glove.

Then it was Matty Beniers’ (Seattle Kraken)  turn to show off with a top-shelf goal, giving the Americans a touchdown lead. Farrell rounded out the scoring.

The U.S. will play Canada on Saturday to continue group play.