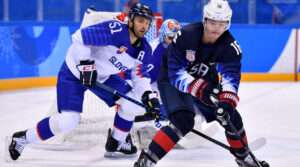 Team USA desperately needed a bounce-back win after dropping its tournament-opener to Slovenia in shocking fashion. The Americans got it on Thursday night against Slovakia. A pair of goals from USA’s Ryan Donato powered the Americans to a 2-1 win over the Slovaks.

With the victory, Team USA earns three points and jumps to the top of the Group B table for the time being. The loss is Slovakia’s first of the tournament; it follows a big upset win over the Olympic Athletes of Russia on Wednesday.

The Americans seemed to play with a lot more aggression and confidence than they did in their opener, and it helped make the difference on Thursday — especially in a tight game down the stretch.

Donato got the United States out to an early 1-0 lead with a power play goal 7:10 into the first period. It was the first goal of the tournament for the 21-year-old, who plays for Harvard and is a Boston Bruins prospect.

It also likely provided a nice boost of confidence for the youngster after a rough finish to Wednesday’s game, when Donato’s blown coverage in overtime led, in part, to Slovenia’s game-winning goal. The Americans’ top line of Donato, Mark Arcobello and Troy Terry was very impressive on Thursday.

The Slovaks answered just 25 seconds later on a deflection along the goal line that snuck past USA goaltender Ryan Zapolski, tying the game 1-1. The goal was credited to Slovakia’s Andrej Kudrna, and it was definitely one that Zapolski would have liked to have back.

A sluggish and scoreless second period left the game deadlocked at 1-1, but Donato found the back of the net with another power play goal just a few minutes into the third frame. After receiving a pass along the goal line, Donato used a nifty move to position himself to get a puck on net down low. His shot found the Slovakian goaltender’s five hole and reclaimed the lead for USA, 2-1.

That score ultimately went final, but not before Slovakia managed to force some pressure with the extra skater late. This time around, the United States managed to hold the line and come away victorious, which should restore a little bit of confidence following Wednesday’s crushing loss.

Zapolski made 21 saves in net for the U.S. and managed to come up big when the Americans were on the penalty kill.

Next up, the Americans will take on the Olympic Athletes from Russia early Saturday morning.