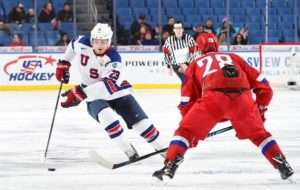 The United States of America will compete for another medal at the World Junior Hockey Championships after beating Russia 4-2 to advance to the semifinals.

The Americans knew scoring first, especially with their D core, would put them on the right track. That’s exactly what they did at 2:18 when Brady Tkachuk set up Kieffer Bellows on the power play, with Bellows one-timing it past Vladislav Sukhachyov to make it 1-0 early.

A few minutes later, however, Russia tied it up shorthanded. Marsel Sholokhov would make it 1-1 after he cut to the backhand and fired a weak-angle shot under Joseph Woll’s blocker, giving Russia a bit of pep in their step.

At 14:34, the Americans struck again. This time, Kailer Yamamoto gave USA the 2-1 lead after he jumped over Sukhachyov’s pad, got shoved by Sholokhov and still found a way to slide the puck in the net, an impressive goal.

Neither team could find the back of the net in the second, a rather dull period. Buit at 43:39, everything changed. Andrei Altybarmakyan would score a highlight-reel goal when he went from his own zone before fighting off Adam Fox in front of the US net. He’d wait long enough to get Woll to bite before sending one into the empty cage, tying the game up and electrifying the Russian faithful at KeyBank.

With just over seven minutes to go, and the action heating up, the Americans took back their lead and never looked back. Once again, Bellows would find the back of the net, after he unloaded a blast of a shot after chasing down a chip-in by Dylan Samberg, giving the Americans a lead they’d never relinquish. Joey Anderson would score one more to pour salt in the wound, finishing off USA’s 4-2 victory.

The United States will take on Sweden in a major heavyweight battle, a 4:00 PM start at KeyBank on Thursday. Russia will leave the tournament without a point in an event the team seemed inconsistent in from the start. It was also the fourth time in five years that the Russians were eliminated by the host country, a tough stat to swallow