USA top Group A after win over Germany 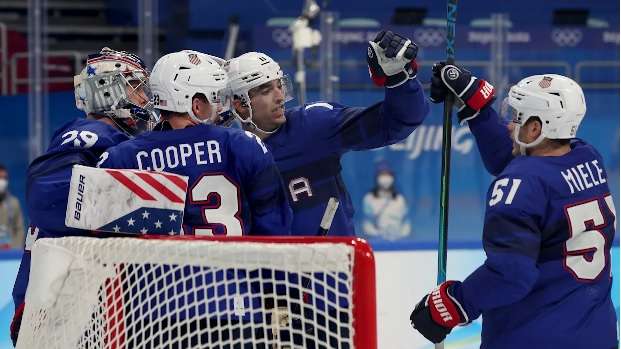 The United States men claimed top spot in Group A after a narrow 3-2 win over Germany,

Needing a win or to force overtime to win Group A, Team USA rose to the occasion.

They made it three wins out of three although they conceded the opening goal and had to hold on at the end.

PyeongChang 2018 silver medallists Germany stuck first and early off a powerplay goal by Patrick Hager after just two minutes, a familiar position for the Americans who trailed early against Canada in their previous game.

But just as in that encounter, the U.S. squad responded quickly with Steven Kampfer scoring the equaliser at 4:26.

Early in the second period, Matt Knies scored to put USA in front.

“Honestly, they’re a fast team, if we can keep up to that pace and play around with them, play physical, I think we can take it to them and eventually win this game,” said Knies in the break prior to the final period on U.S. broadcaster NBC.

Tom Kuhnhackl pulled one back with two and a half minutes remaining, but Germany could not score the tying goal to force overtime.