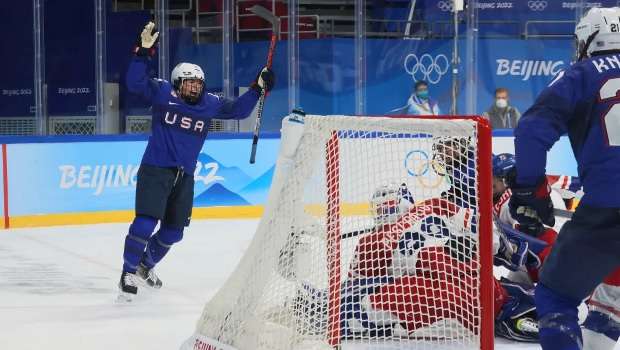 United States women’s ice hockey team are into the Beijing 2022 semi-final after a 4-1 victory over the Czech Republic on Friday (11 February).

Goals from Hilary Knight, Lee Stecklein, a late strike from Savannah Harmon and an empty-netter keep the U.S. alive in the competition, but it wasn’t as convincing as the score-line sounds.

Many expected this to be an easy victory for the reigning Olympic champs, but the Czechs put up a fight worthy of an Olympic knock-out match.

Goalkeeper Klara Peslarova was absolutely inspired and towards the end of the first period had 14 saves from 14 shots.

The Czechs took the lead too, Michaela Pejzlova scored first to set their fans dreaming, but the lead only lasted for 12 seconds as Knight brought the States back level.

The Czechs kept it tight until the third period when Stecklein put them ahead with 13′ left on the clock, her shot deflected by a skate under the pads of a furious Peslarova.

With the U.S. outshooting their opponents 59 – 6 in the game, it was frustrating for the Americans not to secure the win much earlier.

Harmon stepped up to make it safe with her second goal of the competition with just over three minutes to play. She now has two goals and four assists to her name in Beijing.

The Czechs pulled the goalie and Kendall Coyne Schofield found the empty net after she stole the puck six seconds before the buzzer.

“It was the first time we played the American team and I’m really proud of my team,” said Czech captain Alena Mills after the game.

“I wish we’d started to play like this a little bit earlier but it’s our first Olympics, our first experience here. We’re going to go home with a lot of life lessons and a lot of hockey lessons as well and learn from it and be stronger in four years.”

“They definitely came out skating hard, it’s a quarter final, we’re skating for our lives, you know it’s gonna be a great game, they came out wanting to win.

The U.S. will face the winner of Finland – Japan in their semi-final with Canada looming large on the other side of the draw.

For the Czechs, this young team showed that they have what it takes to mix it with the Olympic champs, expect a lot more from them in four years at Milano-Cortina 2026.