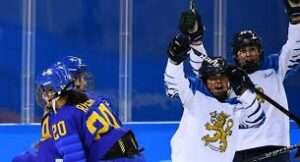 Valila is the Jaromir Jagr of women’s hockey, the oldest player ever to score at the Olympics at age 44. With four goals in Korea and 12 in her Olympic career, the Jyvaskyla-born forward’s legend continues to grow.

Asked if she was having as much fun as in 1998, Valila said: “For sure I am. Maybe I am enjoying it even more!”

All the big guns were firing for Finnish coach Pasi Mustonen in this quarter-final romp. Susanna Tapani and Michelle Karvinen chipped in a goal and an assist apiece, and Petra Nieminen, Emma Nuutinen and Sanni Hakala added singles. Noora Tulus had two assists.

Finland will face a monster challenge against the Americans. The U.S., the four-time defending World Champion, won gold at the 1998 Olympics and has earned three silvers (2002, 2010, 2014) and one bronze (2006) since then. Finland has lost six straight Olympic games to the U.S., and has only one win and one tie in 17 tries at the Women’s Worlds.

“I definitely think we can win,” said Karvinen. “We improved a lot over the last couple of years, but even the last game. We just have to keep really disciplined, rely on our systems but also vary the play because we need to move the puck forward. We need to trust each other as a team and then we have a chance to win. I’m not buying this idea that Canada and the USA are already playing for gold. We are fighting to the end.”

Goalie Noora Raty, who has played every game for Finland, had a relatively easy evening. Her teammates outshot Sweden 31-21 and chased starter Sara Grahn from the Swedish cage in front of 3,803 spectators at the Kwandong Hockey Centre.

“I’m proud of how my team played in front of me and created offense,” said Raty. “I don’t know the last time we scored seven on the Swedish team. I’m really happy how we played the whole 60 minutes.”

It was the fifth meeting between the two Nordic rivals in Olympic history, and the most lopsided Finnish win since the very first encounter, 6-0 on 8 February, 1998 in Nagano. Finland’s record versus Sweden improved to three wins and two losses.

“It’s as big a rivalry for us as it is in the men’s,” said Nuutinen. “We play so many exhibition games over the season, and there’s always that little bit extra motivation when we play against Sweden.”

Emma Nordin and Rebecca Stenberg replied for Sweden. It was a disappointing outcome for the Swedes, who beat Japan 2-1 and Korea 8-0 before losing 2-1 to the Swiss in the preliminary round.

“We were down 3-0 after the first period,” said Nordin. “We let them come out. They did a good job. They came out very hard and pressed us down, but I think we should have been able to do a better job with the rebounds. They had a lot of speed to our net, and our goalies took the first puck, but we let them in too easily for the rebounds.”

The Suomi women are going for their third Olympic medal after bagging bronze in 1998 and 2010. They own the most bronze medals (12) in IIHF Women’s World Championship history. Finland came fifth at the 2014 Olympics, and this is a refreshing change.

“The disappointment was so big in Sochi, I have no words for that,” said Nuutinen. “This was a big win. We had the same game against Sweden in Sochi and we lost, so it feels good right now.”

Finland opened the scoring at 6:12. Captain Jenni Hiirikoski sent the puck up to a rushing Venla Hovi, who battled past Emmy Alasalmi and got it to Nieminen. The 18-year-old phenom deked out Grahn and slid home a backhander.

“We knew if we could get on the board first and then build the lead, we should be in pretty good shape,” said Raty.

At 11:32, it was 2-0. After the Swedes failed to clear the puck under pressure from Tapani and Karvinen, Isa Rahunen took a long shot that deflected in off Valila’s face mask. Valila is known as a heady player, but this was a bit unorthodox. Nonetheless, she was happy to take the goal, and laughed about it on the bench.

Tapani put Finland up 3-0 on the power play with 2:16 left in the first. Showing good patience, she accepted a cross-ice pass from Tulus, outwaited the outstretched stick of Swedish defender Johanna Fallman, and sent a wrister through Grahn’s pads.

“I guess the third goal was the toughest for us to take,” said Swedish captain Emilia Ramboldt. “We just couldn’t get back from that.”

After outshooting the Swedes 11-3 in the opening stanza, the Finns were full value for the lead.

Looking to change the momentum, Sweden replaced Grahn with Sarah Berglind to start the second period. It was a tough spot for the 22-year-old MODO Ornskoldsvik netminder, who had never played at a higher level than the 2014 IIHF Ice Hockey U18 Women’s World Championship before.

Karvinen made it 4-0 at 7:14, circling to the centre point for a slapper that beat Berglind low to the glove side. Swedish coach Leif Boork challenged it for goalie interference, but video review showed that Minnamari Tuominen did not touch Berglind, and Karvinen had her third goal of these Winter Games.

Nordin broke Raty’s shutout bid at 8:53, coming down left wing and squeezing a quick one under the Finnish goalie’s left pad from a bad angle.

The Finns had an answer just 36 seconds later. Karvinen cruised into the Swedish zone, took a pass from Tapani, and put one off the post, and Valila banged the rebound into the gaping cage.

“I am really enjoying playing with these girls,” said Valila. “They are so skillful. They are just amazing players.”

Sweden got a little life with 0:48 left in the middle frame when Nylen Persson hit Stenberg with a shorthanded breakaway pass and she whipped one over Raty’s glove to make it 5-2.

In the third period, Nuutinen ballooned Finland’s lead to 6-2 at 4:35. She got a pass from Tulus on the rush and then scored on her second attempt after Fallman blocked the first one.

After that, nothing would burst Finland’s balloon. Hakala, a 20-year-old Olympic rookie from Jyvaskyla who plays with Valila in Sweden’s HV71, celebrated her first goal at 17:47 to round out the scoring.

“Our teamwork was the best thing about today,” said Karvinen. “We really helped each other, we put each other in good spots and made it easy. Getting seven goals is never a bad thing, going into the semis.”

Sweden’s last Olympic women’s hockey medal was silver in Turin 2006. The Damkronorna fell 4-1 to Canada in the final after their stunning 3-2 semi-final win over the Americans, backstopped by Kim Martin as Maria Rooth got two goals in regulation time plus the shootout clincher.

The Swedes’ last Women’s Worlds medal was bronze in 2007 with a 1-0 win over Finland on Rooth’s second-period goal. And the drought will continue at least until the 2019 Women’s Worlds in Finland.