Want to know about the players in the Sweden Olympic team? 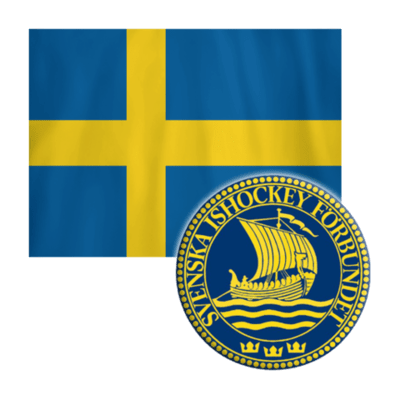 It is not just the North American teams that are affected by the NHL players not coming to the Olympics, but also Sweden. This team contains no one who played a game when Sweden won a Silver Medal in Sochi 2014 and only four players who played when Sweden won the World Championships in 2017.

The team can boast one Stanley Cup winner in Viktor Stålberg (2012-13, Chicago Blackhawks) and a couple of names NHL fans might recognize in Lundqvist and Kronwall. But these are the brothers of their more well-known NHL counterparts. Joel Lundqvist, captain when Sweden won the World Championships last year, is twin brother to the New York Rangers goalie, Henrik. Meanwhile Staffan Kronwall is younger brother by two years to Detroit Redwings hard hitter and Stanley Cup winner, Niklas.

As in my other articles on the US and Canadian team, I’m going to focus on those who play their hockey in the Swedish top division today to give a flavour of the talent you will see in South Korea.

There are not enough good things that can be said about Frölunda Indians captain, Joel Lundqvist. The 35-year old and former Dallas Stars centre leads by example in front of goal at either end of the rink. His qualities defensively can be seen in that he is the leading tackler in the team, indeed, fifth in the whole SHL. On the offensive side, he is third at Frölunda in Assists. His on-ice presence can be well summed up in the statistic that he has plus/ minus of a mind blowing +94 in a career of over 660 games in the SHL.

Of course, the hockey world has gone completely mad about Lundqvist’s teammate, the 17-year- old defenseman Rasmus Dahlin. He shone at the World Juniors and is likely to steal the limelight at the Olympics with his offensive capabilities from the blue line and silky skating skills in creating opportunities whenever he gets the puck.

Like Dahlin, Färjestad’s defenseman Mikael Wikstrand holds a Silver medal from his time at the Junior World Championship. The 24-year-old was drafted by the Ottawa Senators in 2012. He may not be high on Hits or Total Points, but is already out on the ice longer than anyone else on his team. That is because he leads the SHL this season with a plus/minus of + 20. So Team Sweden are relying on good things happening when he is on the ice to bring home Olympic Gold this February.

The final defenseman who is currently playing in the SHL is Simon Bertilsson of Brynäs IF. Drafted by the Philadelphia Flyers in 2009, like Wikstrand, he has played extensively at international level but only in Sweden at club level. Injury has meant that he has only played 26 matches this season but Bertilsson has already clocked up the most Hits in the team. Over the last three years he seems to have matured reduced his Penalty Minutes from an over eager 1.23 PIM per match to a more sedate 0.26 PIM per game.

At 35, Växjö Lakers, Viktor Fasth is the oldest of the three netminders on the Olympic team and the only one who currently plays in Sweden. He has been Sweden’s go-to goalkeeper when Joel Lundqvist’s brother has not available since his return from the NHL in 2015/6. Whilst the Lakers are cruising to victory in the regular season, Fasth has not had the best season in terms of save percentages. Then again, his experience of two seasons in the KHL and two years in the NHL at Anaheim Ducks and Edmonton Oilers means he can deal with the opposition he will face. Hopefully, he will be first choice goalie and get to play for the Gold in this, probably, his final Olympics.

As well as the prowess of Lundqvist, Sweden will also be taking Färjestad’s talented all-rounder, Dick Axelsson. In 2006 he was drafted by the Detroit Red Wings, and last year the 30-year-old was in the team that won the World Championship. He is a great shooter and goal creator lying in sixth overall in the SHL for Total Points making a welcome return to Sweden after three years in Switzerland.

The final forwards I want to consider together because this year’s SHL has been lit up by Skellefteå’s hugely talented trio of Joakim Lindström, Pär Lindholm and Oscar Möller. The three of the have amassed 118 Points between them and all three lie in the top 10 Total Points scorers in the league. That means all three are ahead of some of their Olympic opponents, such as Derek Roy and Rene Bourque of Canada or defensemen Chad Billins and Ryan Gunderson of USA. Möller (28-years-old) and Lindström (34-years-old) perhaps represent the best Swedes outside the NHL. They have World Championship and Junior World Championship medals between them as well as over 250 games in NHL, 300 AHL games and over 200 KHL matches. Whilst they have been unable to break into long term careers in the NHL, both have returned for successful careers in Europe. In fact, both are scoring in the SHL at the same rate they did whilst in the AHL, an impressive 0.80 PPG each. Amazingly, 26-year-old Pär Lindholm is not NHL drafted and has only played in the Sweden. After a good Olympics that will surely change. The trio will perform many moments of hockeygodis, a colloquial Swedish term for great hockey. They will be particularly lethal on the Power Play so expect the siren to ring when Sweden have a man advantage.

The SHL is packed full of super-talented forwards who I would love to have seen at the Olympics. But if the selectors had wanted players with more North American experience they could have chosen Djurgården IF’s, Niclas Bergfors. The 30-year-old played 173 games in the NHL plus several seasons in the AHL and KHL. Another alternative could have been the HV71 forward Martin Tedenby. The 27-year-old has had three years and c. 240 games split evenly between New Jersey Devils and their AHL affiliate. But all these guys will be remaining in Sweden next month and fighting for SHL glory instead.

This Swedish team doesn’t have the NHL experience of the Canadians (5000 matches) or the Americans (3000 matches) but there is enough talent and experience to guarantee a medal. My bet is a repeat of the Junior World Championship Final with a Silver for Sweden and a Gold Canada. If you’re on the front row look out for the latest Swedish craze of casting medals carelessly into the crowds after matches. Maybe they should make that a Winter Olympic sport too!