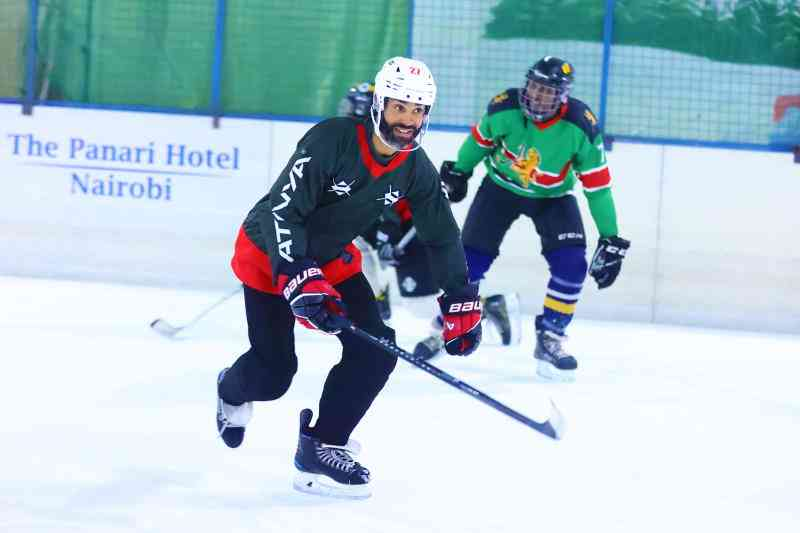 By Ochieng Oyugi – The Sunday Standard

They both had a white mother, and a black father who passed away when they were really young and the dads were from Kenya and of Luo descent.

Oduya, a two-time National Hockey League (NHL) champion is in the country this week for two missions; to support the establishment of ice hockey in Kenya and to trace his Luo roots in Kendu Bay, Karachuonyo Constituency in Homa Bay County where his late father hailed.

The former Chicago Blackhawks defenseman on Wednesday night took part in an exhibition game with the national team, the Ice Lions, at the Panari Ice Rink in Nairobi.

He played the full match where he also supported the budding local players with expensive standardized playing gear including gloves, hockey sticks, pads, jerseys, roller skates, bags, clothing, and other variety of gifts. He also furnished the players with technical skills of the game.

“The players have great potential, they are very good from what I had initially thought of them, and they have the commitment, the drive and the love for the sport.

“They love playing hockey more than anything else, I think that’s the most beautiful thing,” Oduya told Standard Sports.

From the match he played, Oduya believes Kenya has great potential to produce a professional player who can be a force in the NHL.

“For one to be a pro, they need to have passion, dedication, fun, persistence, and commitment.

“I mean they should just love what they do for a very long time. I have seen all these qualities from the game we just had,” he underscored.

The Stanley Cup champion is very confident that the sport will gradually pick up in Kenya after overseeing its establishment in Thailand ten years ago.

“We went to Thailand in 2012 during the NHL break and helped develop the game and the players.

The sport has so far grown there, Thailand is building new rinks and more youths are loving the sport. They are playing it with passion.

“I strongly believe this will also be possible with Kenya as well, now that the country, at least, has an ice rink, one of the few ice hockey arenas in the continent,” he underlined.

Despite winning an Olympics silver with the Sweden national team at the Winter Olympics in Sochi, Russia in 2014 and bronze at the World Championships in Kloten, Switzerland in 2009, Oduya says his greatest moment in the sport was when he lifted the coveted NHL Stanley Cup with the dreaded Chicago Blackhawks in 2013 and 2015.

“Stanley Cup is the most difficult trophy to win in team sport. So I felt proud in those times as I’m the first player, of African heritage, from Europe to make that bold move to America to make that dream come true in my professional career,” he said.

Since his retirement from the sport four years ago, Oduya, 40, has been having a strong urge to spread the game in Africa, starting with Kenya.

It is on this note that he is also seizing the opportunity to establish a connection with his father’s roots.

Oduya, whose mother is Swedish, will this weekend head to Kendu Bay where the remains of his father, who passed on in 1993, were buried.

“I interacted with my father briefly, not that much, the last time he was in Sweden in 1993 shortly before he passed away.

“I have been looking forward to meeting my other family in Kenya for a very long time and I’m really excited about that,” he said.