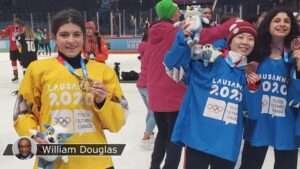 Luisa Wilson said people sometimes do double takes when she tells them about her hockey roots.

Luisa, a 15-year-old who was born in central Mexico, is turning more people into believers.

She made history when became the first Mexico-born athlete to win a Winter Olympics medal when she won the gold competing on a multinational three-on-three hockey team at the 2020 Winter Youth Olympics in Lausanne, Switzerland, in January.

“It’s really cool being able to expand the sport that I really love in Mexico,” Luisa said. “It’s amazing what this sport can do to change your life, and I want more kids to be able to experience that.”

Luisa knew she had done something special when the gold medal was draped around her neck at the award ceremony on the ice, “but I didn’t know how big it was until I got to Mexico and there were reporters there,” she said.

She added a bronze medal to her collection weeks later playing for Mexico at the 2020 International Ice Hockey Federation Under-18 Women’s World Championship Division II Group B in Mexico City.

“It was an awesome experience being able to play with the Mexican team, representing Mexico in Mexico with Mexicans cheering me on because when Mexico cheers, Mexico cheers,” said Luisa, who scored two goals in the tournament. “They bring drums and everything.” 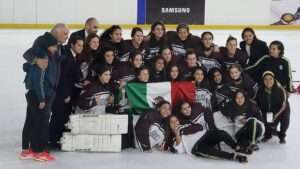 Luisa’s exploits have earned her recognition throughout Mexico and beyond. She landed on Forbes Mexico’s list of the 100 powerful women of Mexico in 2020, a who’s who that includes actress and producer Salma Hayek, Hyundai Mexico CEO Claudia Marquez, Kellogg Latin America president Maria Fernanda Mejia, and Graciela Marquez, Mexico’s secretary of the economy.

The hockey gloves Luisa wore during the Youth Winter Olympics are at the Olympic Museum in Lausanne, said her mother, Laura San Roman Onate.

That’s pretty lofty stuff for a teenager who began skating as a 3-year-old with her father, Brian, a Canadian who was coaching hockey and playing rugby in Mexico.

Most people don’t associate hockey with Mexico, but the country has been an IIHF member since 1985 and has more than 3,000 registered players, most of them youth. Mexico has 22 indoor rinks, according to the IIHF.

The family moved around in Mexico for coaching jobs for Brian Wilson and more ice time as Luisa and her two brothers, Jack and Thomas, progressed as players. 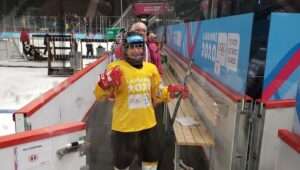 In 2017, the family relocated to suburban Toronto so the children could get more hockey experience and games. Luisa said she plays 50 to 60 games a season now as opposed to in Mexico, where she played about 40 games a season.

“My version of the story is we were in the kitchen and my dad and my brother were, like, we should move to Canada,” Luisa said. “And I was, like, ‘Yeah, let’s do it.’ And my mom was, like, ‘We can’t just move to Canada.’ And we did.”

San Roman Onate recalled that by the time she heard about the Canada idea, it was a done deal.

Wilson’s paternal grandparents were so excited, they had already decided “‘We’ll sell our house in Parry Sound, we’ll move to Toronto so the kids can come to Toronto and go to school and play hockey in the afternoon,'” San Roman Onate said. “Everybody moved for hockey.”

Luisa said the move has paid off in making her a better player. She said she cringes when she watches old videos of her playing.

“I had no hockey sense back then,” she said. “I really liked playing defense because I got to stay in front of the net and just pound kids down onto the ice. That was my go-to move, basically. I knew how to skate because we used to practice 16-17 hours a week on the ice. But we were terrible hockey players because we only got a tournament like once a year.”

Luisa’s increased ice time in Canada and her performance at the Youth Winter Olympics and IIHF world championship have set her focus on playing college hockey and representing Mexico at the Winter Olympics someday.

The Mexico Ice Hockey Federation wants its national women’s national team, ranked 26th in the world by the IIHF, to compete in the Winter Games in the near future.