As winter peaks, ice hockey gets a boost in Ladakh 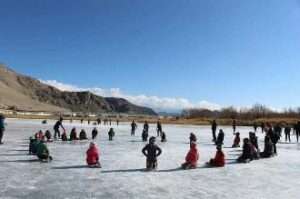 Although ice hockey is less known in other parts of the country, it has become the most sought after sport in Ladakh.

In international events, most of the members of national teams are now being dominated by players of Ladakh. Both men and women teams of ice hockey were formed with players from the region.

The men’s team started to represent the country in international events in 2008 and the women’s team in 2016.

The national women’s ice hockey team created history at the Ice Hockey Women’s Challenge Cup of Asia, held in Bangkok, Thailand, by recording its first international win by defeating Philippines and Malaysia. With this, India finished at the fourth position in the tournament. Ladakh Winter Sports Club general Secretary None P Wangchuk said for the first time, U-20 boys had represented the country in Malaysia last year.

He said in addition to the regular tournaments, a state-level championship sponsored by the J&K State Sports Council was going to be held during this winter sports season. Considering the high potential due to the natural weather of Ladakh, ice hockey has started to get attention of elders as well.

To meet the demand, special coaching is being provided to children and it is the only sport in Ladakh for which coaching at such a large scale is available.

Noor Jahan, general secretary of the Ladakh Women Foundation, said free coaching in remote areas was a part of ice hockey promotion for which money was raised through crowd-funding.

She said in all, 108 girls from different areas of the district took part in a 10-day basic coaching programme in ice hockey. Meanwhile, the winter sports season in Ladakh, during which a series of events in the fields of ice hockey, ice skating, speed skating and figure skating are held, also began recently. The events are being organized by the Ladakh Winter Sports Club.