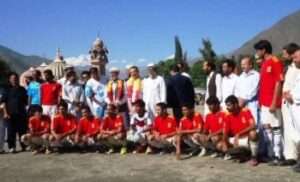 Speaking on the occasion, he said training schools would provide an opportunity to the local promising athletes to train in different disciplines like alpine skiing, snowboarding, ice skating and ice hockey.

He said WSFP would initially build makeshift infrastructures for these schools, which would be funded by the federation.

He said Madklasht and Arungkel, Azad Jammu and Kashmir would be developed as proper ski resorts, on the pattern of Naltar.

He said WSFP would hire foreign coaches to polish the skills of athletes in different disciplines of winter sports. He expressed hope that these schools would one day produce athletes of national and international repute.

A similar school was also inaugurated at Arungkel by WSFP on April 14, thus making a total of five winter sports schools in northern parts of Pakistan. These schools have been established to promote ice and snow sports in the country.