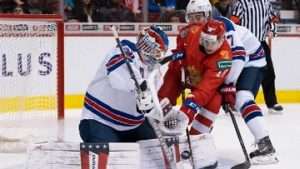 U.S. holds off Russia, will play Finland in final

Cayden Primeau made 34 saves, and the United States advanced to the championship game with a 2-1 win against Russia in the semifinals of the 2019 IIHF World Junior Championship at Rogers Arena on Friday.

Oliver Wahlstrom (New York Islanders) and Alexander Chmelevski (San Jose Sharks) scored for the United States, which eliminated Russia for the third straight year (semifinals in 2017, quarterfinals in 2018) and will play Finland, a 6-1 semifinal winner against Switzerland, on Saturday (8 p.m. ET; NHLN, TSN).

The United States is 8-1-0-12 against Russia in the tournament.

Grigori Denisenko (Florida Panthers) scored and Pyotr Kochetkov made 25 saves for Russia, which lost for the first time in six tournament games and will play the loser of the Finland/Switzerland game for the bronze medal.

“It’s a big disappointment, but a new day is [Saturday], a new game,” Russia forward Kirill Slepets said through a translator. “Our team is one of the best here. We were a little bit unlucky. We will fight for the (bronze) medal.”

Denisenko appeared to have given Russia a 1-0 lead at 12:13 of the first period, but a video review determined he redirected the puck into the net with his skate, which is not allowed according to IIHF rules.

Wahlstrom gave the United States a 1-0 lead at 14:29 of the first with a one-timer from the right circle off a pass from Logan Cockerill (Islanders).

Chmelevski made it 2-0 with a power-play goal off a pass from Jack Hughes (2019 NHL Draft eligible) at 4:20 of the second period.

“It was a little nerve-racking in the end, and they’re really hard to play against because they have a lot of high-end skill,” Hughes said. “It was nice to come away with the win. We’ll need to have the same effort [Saturday].”

Denisenko cut it to 2-1 at 13:36 from low in the right circle on a shot that beat Primeau (Montreal Canadiens) over his left shoulder.

Russia forward Klim Kostin (St. Louis Blues) almost tied the game 1:12 into the third period when his shot on the power play trickled behind Primeau, but United States defenseman Philip Kemp (Edmonton Oilers) cleared the puck away with his stick just before it crossed the goal line.

“I saw a guy take a shot and then it hit Primeau and I kind of lost if for a bit,” Kemp said. “Then I saw it drop down, and I knew I had to beat that guy’s stick who was in the crease, so I just tried to get a low position and dig it out.

“To be honest, I wasn’t really thinking, it was just instincts. I don’t know if it was from practice, muscle memory or what not from just digging them out on the crease, but it was a huge play for us.”

Primeau made 15 saves in the third period to preserve the lead.

“He’s provided comfort for us when we’ve needed him,” United States coach Mike Hastings said. “When you play a team as good as Russia, they’re going to get their chances and you need that last line of defense to be there for you, to allow you time to catch your breath at times.”

“Your best penalty killer needs to be your goaltender, and [Primeau] was [Friday],” Hastings said.

Finland will play the United States on Saturday for the championship.

“Of course they are the favorites, but I think we have a good chance if we battle hard and we are the guys who control the puck,” Finland coach Jussi Ahokas said. “We played better and better after every game.”

“We got a couple of goals straight from the beginning, so it gave us confidence to play through the game,” Talvitie said. “It was good we scored some goals. It was a boost on our confidence.”

“The team that wants it more will win and we’ll leave it all on the ice,” Switzerland defenseman Simon le Coultre said.

Switzerland made the semifinal with a 2-0 upset of Sweden and 41 saves from Luca Hollenstein, but the 2019 NHL Draft-eligible goalie was pulled after four goals on eight shots in 7:43 Friday.

Jokiharju, who was picked No. 29 in the 2017 draft and played 32 games for the Blackhawks this season, scored on a power play to make it 4-0.

Akira Schmid (Devils) made 23 saves in relief for Switzerland, which won its only WJC medal in 1998 (bronze). Russia defeated Switzerland 7-4 in the preliminary round; the game was tied 3-3 after two periods.