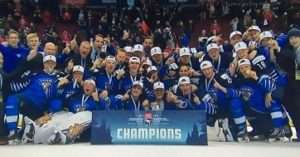 Kaapo Kakko scored the winner with 1:26 left as Finland edged the U.S. 3-2 in the 2019 World Junior gold medal game on Saturday night.

Anton Lundell won the draw in the U.S. zone and defenceman Henri Jokirharju got the puck at the blue line. Lundell couldn’t bang in the rebound from Jokiharju’s shot, but Kakko backhanded it past the outstretched right pad of U.S. goalie Cayden Primeau.

Jesse Ylonen and Otto Latvala had Finland’s other goals.

Alexander Chmelevski had a goal and an assist and Josh Norris also scored for the Americans, who came back from a 2-0 third-period deficit. Noah Cates added two assists, and Jack Hughes, the top-rated 2019 NHL Draft prospect, had one assist, matching his output in his previous three games.

However, this night will be remembered for the big goal by Kakko, who is projected to be drafted after Hughes. It was his second goal of these World Juniors.

It’s the third gold medal in six years and fifth in tournament history for Finland, one more than the Americans. The Finns previously triumphed in 1987, 1998, 2014, and 2016. Winning is becoming a habit now.

At Vancouver’s Rogers Arena, the Finns killed off five man advantages against the U.S., which entered the final clicking at a tournament-high 31.8 percent. Shots favoured Finland 31-28, and Primeau and Finnish starter Ukko-Pekka Luukkonen were both heroic.

Despite the loss, the silver-medal Americans extended their World Junior medal streak to four straight years. They won bronze in 2016 and 2018 and gold in 2017.

With five U.S. returnees and seven Finnish returnees from last year, there was no shortage of motivation. The gold medal game was played at a high tempo befitting two of the tournament’s best skating teams.

In a scoreless first period, the Finns outshot their opponents 13-9, but the story was the high-quality chances around Luukkonen’s net.

The U.S. got the first power play when a forechecking Rasmus Kupari caught Josh Norris with an elbow in the corner midway through the opening frame. The Americans thought they’d opened the scoring at 9:45. Luukkonen deflected Ryan Poehling’s shot off the glass and it bounced out in front, enabling Oliver Wahlstrom to fire the loose puck in during a scrum. However, the goal was waved off since Chmelevski was in the crease. Video review validated the on-ice call.

On the second U.S. man advantage, the Finnish goalie made a fabulous stick save on Chmelevski at the side of the net. Late in the period, Luukkonen dazzled again after Cockerill raced in, deked around Jokiharju to the outside and centred it from behind the goal line to Chmelevski for a Grade-A chance.

Flirting with danger, the Finns killed off two more second-period U.S. power plays before Evan Barratt was dinged for interfering with Luukkonen. Ylonen opened the scoring for Finland with an absolute howitzer at 11:31, one-timing Laaksonen’s feed from just inside the blue line over Primeau’s glove. Ylonen got the lone Finnish goal in the 4-1 New Year’s Eve loss to the Americans in Victoria.

With Teemu Engberg off for tripping up Chmelevski, Sami Moilanen nearly tipped in a glorious shorthanded chance on the rush. Before the penalty expired, Kakko and Lundell failed to finish off a 2-on-1 break.

In the third period, the Finns stayed patient and supported the puck well as the Americans pushed for the equalizer.

At the six-minute mark of the third period, Latvala gave Finland a 2-0 lead when his wrister from near the centre point sailed through traffic and beat Primeau on the stick side.

The Americans stayed resilient. They struck back just 1:01 later on a broken play. Jack Hughes attempted a shot that was blocked by Laaksonen, and the puck squirted to Chmelevski, who scored from a bad angle to Luukkonen’s right.

The U.S knotted the score at 8:47. Chmelevski grabbed a loose puck in the left faceoff circle and backhanded it to Josh Norris, whose one-timer flew past a sliding Luukkonen.

With 10 minutes left in the third, Luukkonen smartly denied Jack Hughes on a breakaway. With the Americans coming on strong, he foiled Wahlstrom from the slot four minutes later.

Captain Aarne Talvitie’s efforts to play in the third period were hampered by an injured ankle. The Finns tried to gut it out as the Vancouver crowd of 17,206 chanted: “Let’s go, Finland!” And Kakko delivered.

Every previous gold medal game in the 2010’s has been decided by no more than two goals, and this tense thriller completed the pattern. Finland is proud to return to the medal podium after a disastrous ninth-place finish in 2017 and an underwhelming sixth-place run in 2018.

The result shows how much Finnish hockey has grown since the last time they played for a World Junior medal in Vancouver. In 2006, goalie Tuukka Rask stole the show for the Finns with his quarter-final heroics versus Sweden and bronze medal-winning performance against the Americans. Thirteen years later, Suomi is on top of the world.

This was the first IIHF gold medal game played at Rogers Arena since Sidney Crosby scored the 3-2 overtime winner against the Americans in the 2010 Olympic final. The arena also hosted the 2006 World Junior final, where Canada blanked Russia 5-0.

An added bonus for Vancouver fans was watching three future Canucks prospects in the final. Defenceman Quinn Hughes was a minutes monster and forward Tyler Madden also played a big role for the U.S. during the tournament. Finnish defenceman Toni Utunen, who broke Canadian hearts with his 2-1 quarter-final overtime winner against the host team, also showed good upside.

These young men are the future in Vancouver, and with hard work and good fortune, they could become as beloved as Henrik Sedin or Jyrki Lumme, who attended the final and got rousing cheers when they were shown on the big screen.

With this exhilarating tournament in the books, the eyes of U20 hockey fans now turn toward the Czech Republic, where the Finns will aim to defend their title at the 2020 IIHF World Junior Championship in Ostrava and Trinec. 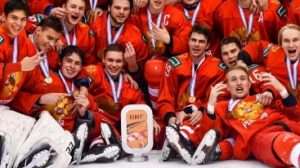 The Russian players pose for a team photo with their bronze medals.

Russia beat Switzerland 5-2 in the 2019 IIHF World Junior Championship bronze medal game on Saturday, as world-class skill and opportunism won out over a never-say-die attitude.

In the early game in Vancouver, the underdog Swiss hung tough with the Russians till the end, but just couldn’t come up with enough offence.

“Not a bad finish for a big tournament,” said Russian captain Klim Kostin, who was the target of booing at Rogers Arena, but scored the eventual winner midway through the second period.

Kirill Slepets led the way with a hat trick, and Nikita Shashkov also scored for Russia.

“I don’t think I was so good in the whole tournament, but in this game I was able to score three goals and help the team,” said Slepets.

“It was pretty surprising for us, but at the end, we’re not going home with a medal and that’s pretty disappointing,” said Swiss defenceman Davyd Barandun.

Goalie Pyotr Kochetkov, who plays for the VHL’s HK Ryazan and remains undrafted by an NHL club, made some fantastic saves to keep Russia ahead, honoring the number 20 on his jersey. It was made world-famous by IIHF Centennial All-Star Team member and Ice Hockey Federation of Russia president Vladislav Tretiak.

While coach Valeri Bragin’s team is disappointed about failing to win Russia’s first gold since 2011, returning to the podium is a creditable achievement in itself. Russia medaled for seven straight years before finishing fifth in Buffalo last year.

“We had a meeting only with the guys,” said assistant captain Dmitri Samorukov. “We talked about it. We tried to say something about what we should do today. And it worked, because we won.”

With an assist, forward Grigori Denisenko took over the tournament points lead (4-5-9). Alexander Romanov’s assist padded his lead as the top-scoring defenceman (1-7-8).

It was a good run in Vancouver and Victoria for the Swiss. They won their one and only bronze medal in 1998 in Helsinki, thanks principally to David Aebischer’s great goaltending. This was the third time they’ve finished fourth after 2002 and 2010.

With a solid but unremarkable-looking roster, Swiss coach Christian Wohlwend got his team to compete hard in every preliminary round game and upset Sweden 2-0 in the quarter-final. The Swiss can go home with their heads held high.

At the end of the day, this bronze-medal score is about what most observers would have predicted after Russia lost 2-1 to the U.S. and Switzerland 6-1 to Finland in the semi-finals.

Slepets opened the scoring for Russia at 4:25. The Lokomotiv Yaroslavl forward got all kinds of time and space as he stickhandled off the right side boards and popped a forehand deke through Swiss starter Luca Hollenstein’s pads.

“He’s pretty quick!” Samorukov said of Slepets with a smile. “I didn’t know that. We talked about how he was going to score one-on-one with the goalie.”

The biggest Russian defensive breakdown of the first period saw Philipp Kurashev, Switzerland’s leading scorer with six goals, left alone in front of the net with under a minute left. However, Kochetkov denied him with a poke check that would have made Toronto Maple Leafs legend Johnny Bower proud.

“First period, terrible,” said Wohlwend of the Swiss. “Terrible. I couldn’t understand it, the whole coaching staff couldn’t understand it. Such a great chance and we were sleeping. We played scared, we played slow with no courage and then, yeah, I had to get loud a little bit in the dressing room. Then it worked.”

In the second period, Switzerland jacked up its urgency and got on the board at 4:54. The Russians unwisely left another Swiss forward, Nussbaumer, unguarded at the crease. He accepted defenceman Simon le Coultre’s pass from the blue line, pivoted to the forehand and tucked it past Kochetkov.

The red-and-white, predominantly Canadian fans urged the underdogs on with chants of “Let’s go Switzerland!”, plus “Defence!” during a mid-game Russian power play.

Kostin, who issued an apology on social media for behaving disrespectfully after the semi-final loss to the U.S., tallied his third goal of the tournament from the slot to put his team up 3-1 at 12:53. The 19-year-old celebrated by plugging his ears.

“The crowd was booing the Russian team and me personally,” Kostin said. “When I scored, it was automatic. I did it automatically, but I didn’t want to offend anyone.”

The Swiss refused to wilt. Less than three minutes later, Kochetkov made two stunning, Dominik Hasek-like saves in tight on Justin Sigrist, but the puck flew up in the air and Bruschweiler batted it in baseball-style to make it 3-2.

Commenting on his spectacular play, Kochetkov said: “After the CHL Canada-Russia series, the annual series in November, I received a boost of confidence that I could also be good at the international level.” He had a superb 0.67 GAA and 97.8 save percentage versus the best of the WHL, OHL, and QMJHL.

Early in the third period, the Swiss kept coming, but Kochetkov barred the door. And Slepets, in a classic display of Russian opportunism, split the Swiss defence in the neutral zone for a breakaway and slid a backhander through Hollenstein’s legs at 6:33.

Pavel Shen was a hero on New Year’s Eve when he scored the winning goal against host Canada, but he had goat potential when he took a high-sticking double minor with under 10 minutes to play. Still, Kochetkov remained as impregnable as the Kremlin walls.

With Russia shorthanded, Slepets completed his hat trick into an empty net for his fifth goal of the tournament with 2:01 left.

“It feels pretty good,” said Samorukov. “You win your last game, right? So it feels like gold. We can’t find the words for it. You’re family when you meet for two weeks, three weeks. It’s unbelievable just to see guys and all this stuff. It’s pretty special.”

Including the Soviet period, this is the eleventh Russian World Junior bronze medal of all time.