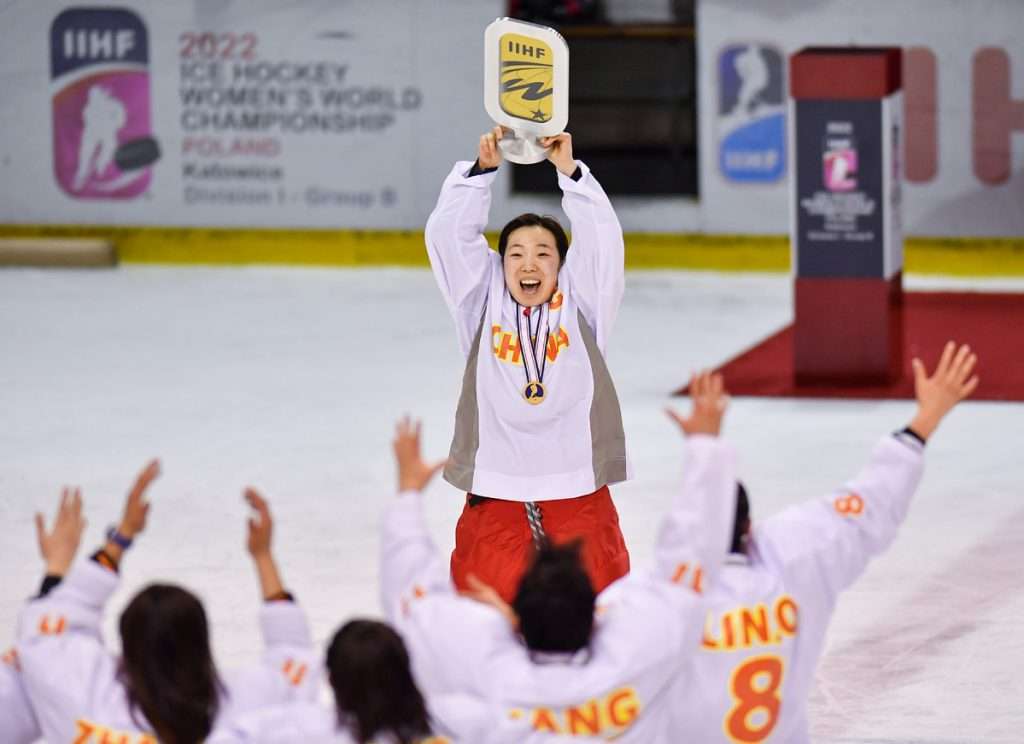 A new day is dawning for Chinese ice hockey, with the national women’s team’s promotion to the second tier of the world championship building on the momentum of the Beijing 2022 campaign.

The Chinese women won five straight games to emerge victorious last week at the International Ice Hockey Federation Women’s World Championship Division I Group B event in Katowice, Poland, thereby claiming a spot in the Group A tournament next year.

After doing home fans proud with its solid performances at Beijing 2022 in February, China is back in Group A－a second-tier event in the IIHF system－for the first time since 2011. Previously, China had been in the world championship’s top tournament, above the divisions from I-III, from 1992 until 2009, finishing fourth at the 1994 and 1997 top-tier worlds, as well as at the 1998 Winter Olympics in Nagano, Japan.

Team China’s impressive run in Poland, capped by a decisive 7-2 win over the host, has built upon the excitement generated during the Beijing Winter Olympics to draw more attention to the sport in a country where ice hockey’s popularity is taking off, especially at youth level.

Yu Baiwei, Team China’s captain and the oldest member of the squad, couldn’t contain her joy after sealing the long-awaited promotion.

“I don’t think I can put it into words. I am just so excited that we’ve made our way back toward the top. It’s a new beginning, and there will be more challenges ahead,” said the 33-year-old Yu, who has experienced plenty of ups and downs over the past 17 years with the squad.

Yu made her national team debut in 2005, when the women’s program began its decade-long struggle following its 1990s heyday.

The home Olympics came just in time with stronger State-funded support helping veterans like Yu return to the Olympic stage after the team’s last appearance at the 2010 Games in Vancouver, Canada.

“I think that playing in the Olympics after missing out on the Games for so long gave us so much confidence,” said Yu, who hails from traditional winter sports hotbed Heilongjiang province in Northeast China.

“We’ve shown what we learned and how we improved from the Olympics at the world championship. It boosted our faith that we can take another step further next year.”

Hot on the heels of the women’s event, China’s men’s squad will also fight for a promotion spot at the Division II Group A worlds, which begin on April 25 in Croatia.

Progression up the annual championship system toward the top divisions was set as a post-Beijing 2022 goal for China’s national ice hockey program leading up to the 2026 Winter Olympics in Italy.

China hopes to at least qualify its 17th-ranked women’s team as a top-division contender; at Beijing 2022, both the men and women qualified directly as host.

A naturalization policy which has added a competitive legion of North American-born players with Chinese heritage is expected to continue through the 2026 Games.

Almost half of the current women’s squad’s 24 members were born or developed their game in the US or Canada.

They were selected at tryout camps as early as 2017 to join the Chinese national program, which is jointly run by the Chinese Ice Hockey Association, KHL Russia-based partner club Kunlun Red Star and its women’s affiliate, the Vanke Rays.

After playing together in the Russian and Canadian professional leagues, China’s homegrown players and their more experienced overseas-born teammates at both KRS and the Vanke Rays have built a strong camaraderie on their mission to help grow the sport in China.

“The coach has given us a lot of freedom to play how we’ve been playing all year and the team has a lot of chemistry,” said the University of Connecticut alumna whose grandparents were born in China.

Lin Qiqi and US-born Lin Ni, aka Rachel Llanes, both finished with seven goals and 15 points to lead both those categories at the Group B championship.

After playing on the Vanke Rays with their native Chinese teammates for several seasons, first in the Canadian women’s league and then the Russian system, the overseas-born players are proud to represent their ancestors’ nation on the ice.

“We’ve kind of been in and out of the lines in the four years but it’s been pretty solidified this past season. We know each other and how everyone plays, so it’s been really good,” said Lin Qiqi.