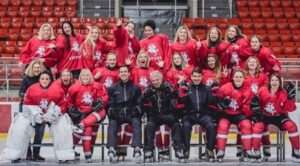 In December of 2019, the Lithuanian women’s team made its debut at the Women’s World Championships Division III in Sofia Bulgaria. For the first time at international competitions. Next season, the team will face even greater challenges. First of all, the girls will make their debut in the Olympic qualification and, finally, Women’s World Championships Division III on home ice. “We can popularize women’s hockey and take the first steps at the international level,” said Eglė Zemlickienė, General Manger of the women’s hockey team of Lithuania.

The IIHF entrusted Lithuania to host the Women’s World Championship of Division III.

Usually in one division of the championship there are six teams, but this time there will be more. Women’s teams of Estonia, Bosnia, Ukraine, Belgium, Romania, Bulgaria and Hong Kong will take part in the tournament (division III) with Lithuanians

“ From an organizational point of view, the biggest problem is how to make a schedule for the 8th team, and to arrange all the members of the national teams in hotels. However, we are optimistic about the situation and hope that perhaps the new ice arena in Kaunas will already be operational. It is planned to open before the new year. If not, we will hold the championship in two arenas. However, Kaunas remains a priority, it is a strategically convenient place. Of course, if force will play in two arenas, although we still hope that the championship will be held in Kaunas, ”added Egle. 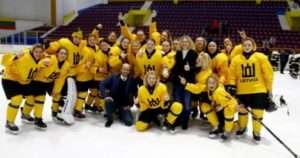 Lithuanian national team at the World Championships in Bulgaria

Before the home World Championships next year, the women’s team will still have to go to Iceland. In December of this year, in Reykjavik, for the first time in the history of Lithuania, their women’s team will compete in the pre-qualification for the Olympic Games. The Lithuanian national team will compete in the first qualifying round against four teams – Iceland, Bulgaria and Hong Kong.

“I would not like to speak boldly about our goals and opportunities. After all, this will be our debut in the Olympic qualifiers. We are still not very familiar with our rivals. It is difficult to say how we will do in this competition, but I am very glad that next season we will have two tournaments – the Olympic Games and the World Championships. This is a great opportunity to draw attention to women’s hockey. We must promote women’s hockey and take the first steps at the global level. Both I and all the girls in the team are looking forward to the upcoming season. True, recently, when the coronavirus is still widespread in the world, it is difficult to plan something specifically. Therefore, I do not know if we can even fly to Iceland. We are preparing as if everything will be fine. We plan to fly to Iceland and plan to hold the World Championships in Lithuania. Let’s see how everything goes“, – said Zemyckene.

“ The official preparations for the Olympic selection are likely to begin in November. Usually it starts 2-3 weeks before departure. But, no doubt, before the training camp in the national team, girls are required to train in thee clubs, of course. Also this year, our hockey players will take part in the Baltic League and the Latvian Championship. Various friendly tournaments will also be held , ”concluded Egle.

Bernd Haake, head coach of the Lithuanian women’s hockey team, will arrive in Lithuania 2-3 weeks before flying to Iceland

“ We are pleased with the work of the coach with the women’s team last year. I think the debut was a success. Haake gladly agreed to help us in two tournaments in the new season, everything has already been agreed with him. He will fly to Lithuania at the end of October, when the national team will begin intensive preparations for future games. When it came to choosing a coach, it was Haake who was the best option at the present time, because he worked with our team, he knows many players since last year, he knows their strengths and weaknesses , ”says the head of the team.

Recall that in the debut tournament of the third division of the World Championships in Bulgaria last year, Lithuanian hockey players took fifth place. The Lithuanian national team had two victories – it defeated the Hong Kong team 4: 1 and unexpectedly beat the national team of Belgium, which was considered the favorite of the tournament, with a score of 4: 3.

“ I appreciate the girls debut at the World Championships. They played well. Perhaps the girls dreamed of medals, but the goal for the tournament was different – we hoped to win at least one or two matches, we wanted to show what we are capable of. The result met expectations. Debut is a debut, we warm up and understand what else we can do to become stronger. Now there are more serious challenges ahead ”

When asked if we can expect better results in the upcoming season, the team manager does not hesitate to reflect: “ As for the World Championships – since there will be eight teams in it, the tournament will be divided into two groups of four, and then there will be a play- off So much can determine which group we get into. Maybe this will be a favorable group for us, or maybe not. Everything can lead to medals, but it can be versatile. It’s hard to predict anything. We will also see how our girls have become stronger this year. Players roster has not yet been determined and there may be changes in the composition. And some of the rivals are also unknown , ”said Egle. 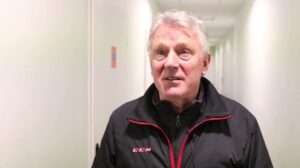 Bernd Haake is a 74-year-old specialist who has been working in Lithuania since 2012. Coaches both women’s and men’s and youth national teams of Lithuania. Previously coached HC “Energy” from Elektrenai

Women’s hockey is developing in Lithuania

Last year, before traveling to Bulgaria, Zemlickienė, was glad that the popularity of women’s hockey in the country was growing. According to a specialist who has been working in women’s hockey for more than five years, the popularity has increased even more since his debut at the world championships.

“ After the appearance at the World Championships Division III last year, popularity and attention to us has increased, interest is really felt. It is very nice. In fact, more and more girls are choosing to play hockey in schools. Girls from 4-5 years old already lead to classes in this sport. Of course, it is difficult to say how many of them will remain in hockey, but it is funny that there are more and more of them. The attitude of coaches is also changing. We also already have the first team of girls under 10 in Vilnius. I am glad that gradually the popularity is growing , ”said the head of the women’s program.

In the end, Zemlickienė, added, it will be necessary to wait a few years before popularity increases significantly. However, according to her, the results, although small, can be seen right away: “ Everything is really going in a positive direction and it’s nice, ” she finished.